I understand
Home••Insight: Productivity and efficiency will...

Insight: Productivity and efficiency will be the watchwords after Covid-19

As industry in the UK and Ireland emerges from the pandemic lockdown, improvements in production efficiency will be essential to maintain competitiveness in a global marketplace. Many original equipment manufacturers and the subcontractors in their supply chains will be pitching for sales in an environment characterised by fewer business opportunities in the short term, suppliers hungry for work and smaller profit margins. Only the most productive companies will survive.

The position that Salisbury-based workholding and automation specialist 1st Machine Tool Accessories takes on the challenges facing industry is that they are in fact opportunities. The current situation continues to give machine shops, at least those not involved in supplying parts for vital medical equipment, the time to take stock of how effectively they are manufacturing components. They can carry out in-depth analyses of their processes to see where cost can be driven out while still maintaining the high quality needed in order to sell the resulting goods. Unit production cost is everything and there are many ways of reducing it. 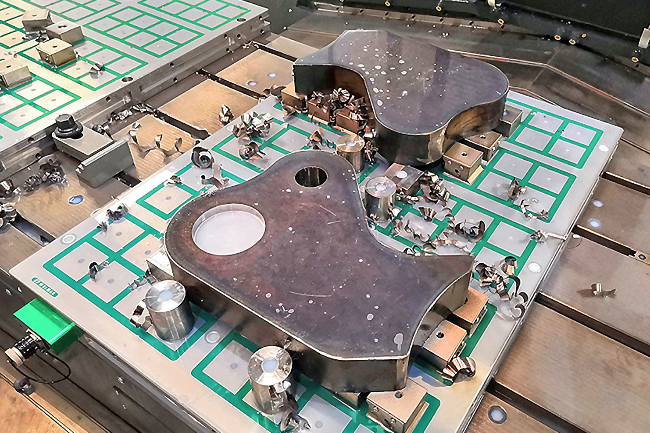 For instance, one of the most recent agency lines taken on by 1st MTA is the range of electropermanent magnetic workholding and handling equipment from Walmag in the Czech Republic. The manufacturer asserts that swapping from the use of conventional vices to a magnetic solution allows five sides of a components to be machined in one hit, typically raising output by a quarter for no increase in production cost. Further benefits of the technology include shorter lead-times, allowing jobs to be invoiced more quickly, and no deformation of workpieces while they are being held for milling, drilling or grinding.

Walmag has gone so far as to calculate the comparative cost benefit of producing a part in one operation using magnetic workholding rather than in two operations using compressive clamping. The analysis is based on milling a 400 x 600 x 20 mm component on a vertical machining centre in a 30-minute cycle. The saving derives solely from being able to fixture the billet once in one minute instead of twice in a total of eight minutes.

Based on £16.20 per hour to employ an operator and £43.20 per hour for use of the machine tool, the £5,079.24 capital cost of the Walmag clamp and control unit is amortised in 49 days in single-shift operation or in half that time for a double-shift pattern. After that, there is a net saving for the manufacturer of £103.95 per shift, assuming 15 workpieces are machined.

1st MTA offers a large portfolio of workholding equipment for securing components on machining centres during 3- to 5-axis machining operations. They include the Italian Tecnomors range of manual and automatic indexing chucks, Chick workholding equipment from the US including base plates and trunnion-type arrangements for multiple workpiece clamping, Leave (Taiwanese) and Abbott (US) fixturing products, OK-Vise manual and pneumatic clamps from Finland, and BEST centric (self-centring) and zero-point fixturing from Germany.

There are also the RotaVice UK-manufactured manual indexing head, zero-point clamping products from Czech manufacturer V-Tech, and Kitagawa (Japanese) 4th/5th-axis rotary tables as well as its Swift Klamp range of manual and automated workholding devices that exploit the simplicity of the HSK tool interface. 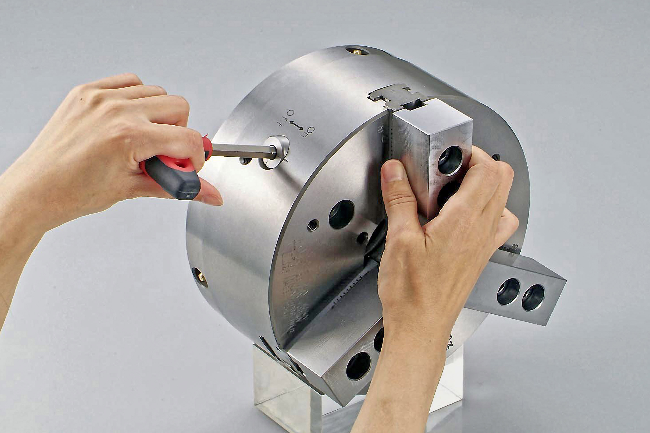 Manufacturers should carry out in-depth analyses of their processes to see where cost can be driven out while still maintaining the high quality / Picture: 1st MTA

Another example of monetary savings in manufacturing through reducing job set-up times, this time when turning or turn-milling, comes from the use of quick-change chucks supplied by 1st MTA, which is sole agent for these and all other products from Kitagawa.

Switching from hard jaws for a first operation (op 1) to soft jaws for a second (op 2) requires removing them, cleaning the serrated interface, bolting on the soft jaws, inserting the boring ring and skimming the jaws. It all takes time, during which the spindle is not turning and production stops. A quick-change chuck, on the other hand, has the ability to eliminate a majority of this wasted time, decreasing the delay between the end of op 1 and the beginning of op 2 by as much as 90 percent. Instead of wasting 20 minutes, changeover typically takes just two minutes.

The process relies on three soft jaws machined for securing a specific component remaining attached to their respective base jaw counterparts. Sets of these assemblies can be tightened and released quickly using a manual key, allowing them to slide in and out of a chuck with minimal delay. The solution also ensures that runout is kept within 10 µm of the original TIR (total indicator reading).

As an illustration of the possible savings, 1st MTA has prepared a cost comparison that shows return on investment in a very short time when using a Kitagawa QJR (quick jaw release), 254 mm (10 inch), 3-jaw, large-through-hole power chuck with five sets of standard metric quick-change jaws plus soft jaws, which all costs £6,124. The chuck interchanges directly with a standard Kitagawa BB 210 large-bore version, priced at £2,177 with five sets of jaws, with which the comparison is made.

Average time saved when exchanging the QJR instead of the BB chuck is 15 minutes. Based on three set-ups per day and an estimated machining cost of £60 per hour, the daily saving for the three changeovers is £45. The difference in purchase price between the two chucks is £3,947. At £45 saving per day, the time required to break even is slightly less than 88 days. On this basis, the total saving by the end of the first year is £12,478, after which the annual saving is £16,425.

Apart from the significant financial advantage, 1st MTA points out that secure, high quality workholding is an essential facet of cost-effective turning and can enhance a lathe’s performance, whereas poor retention of a workpiece can reduce output, lower quality and compromise safety.

In its standard range, the company offers a wide variety of jaw, scroll and collet chucks, powered or manually operated. Tailored solutions are also supplied for holding components during turning operations, ranging from slight modifications to a standard design in most cases to, for special requirements, highly engineered bespoke items. Although these are often elaborate and require increased initial investment, such solutions can be highly cost-effective, particularly in large volume production applications or when manufacturing awkwardly shaped parts.