For those working in the aerospace industry, at whatever level of the supply chain, there is every chance that you have come across the name of Chester Hall Precision.

The company was founded in 1974, by Brian Brown and today, Chester Hall employs some 100 plus staff who work on a three-shift pattern that enables 24-hour cover Monday to Friday from its 6000 sq m freehold premises. In the past, the company has supplied parts to sectors such as defence and automotive but is now firmly established as a key part of the aerospace supply chain, making large monolithic machinings, assemblies and sub-assemblies for Tier 1 aerospace companies.

“We provide a total service including concurrent engineering, manufacturing, treatments and assembly, along with the management of the complete supply chain,” says Director Phil Brown. “Most importantly, we hold all relevant BSI accreditations, and have recently gone through our BSI recertification audit for the BSI AS9100 Rev D, which is the new BSI revision standard specifically relating to aerospace companies. It’s an achievement to be accredited to these stringent standards, but it is vital for what we do, namely critical, large structural components for aircrafts.” 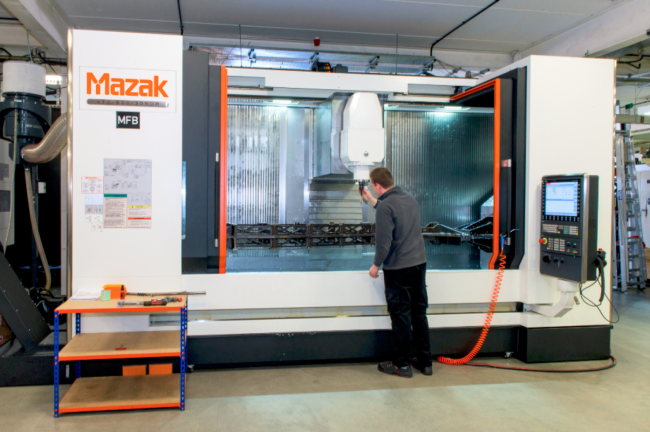 The company now has a total of eight Mazak machines, with the latest being two VTC-800/30SDR Siemens machines / Picture: Mazak

Mr Brown says that aerospace is not for the faint-hearted. “It is a very demanding sector, with the main challenges being product quality, and OTD or ‘on-time-delivery’. It is also very competitive so you have to keep up with the latest technology or someone will overtake you.”

Mr Brown believes that the key to Chester Hall’s success has been putting in place a continuous improvement culture. “We have what I term a right first-time culture, which includes employing techniques such as off-line programming for our 5-axis machining centres, state of the art machining simulation software, a lessons-learnt methodology and stringent internal audits, data analysis and training programmes. The result is that we have developed long-term contractual partnerships with Tier One aerospace manufacturers.”

The company’s relationship with Mazak has also been an important one. “We started with Mazak machines many years ago – 1995 in fact. We had realised in the late 1980s that we needed to get into CNC machines if we wanted to have a future in machining and really build this business.”

He continues: “Our first machines were equipped with Mazatrol, but as we developed our capabilities we increasingly standardised on Siemens control, which is very user-friendly. Our setters and operators really like it, because it is more Windows based, so it feels like you are on a PC, which means people get to grips with it quite quickly.”

The decision to make selected machines from the Mazak range available with Siemens control was a welcome development for Chester Hall. The company now has a total of eight Mazak machines including two FH-880 and FH-8800 horizontal machining centres and four VTC-800 series machines, the latest being two VTC-800/30SDR Siemens machines. 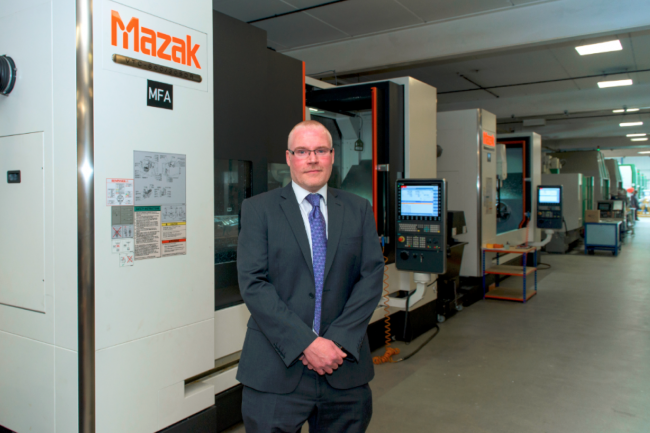 Phil Brown, Director at Chester Hall Precision – the firm employs some 100 plus staff who work on a three-shift pattern that enables 24-hour cover Monday to Friday / Picture: Mazak

“We like the VTC-800 series. It’s a powerful machine equipped with a good fifth axis movement that allows the spindle head to rotate a full +/- 110°. The fact that we can now get it with Siemens control, which we’ve all but standardised upon, made the decision an easy one.”

However, the relatively compact footprint of the UK-built VTC was also a major selling-point. “We needed more capacity and the VTC has a very good footprint, so the machine works well for us in that respect as well.

“We have a 6000 square metre facility, which is a good size, but a lot of our machine fleet is large and we have to use space efficiently. The VTC-800 was perfect and we’ve now got four of the machines, all equipped with Siemens, working around the clock.”

The VTC-800 machines produce quality products, as seen in the finished parts that are coming off the machine.

In the demanding aerospace sector, aftersales support is almost as important as the quality of the machine. “With machine tools, the main challenges are support, repeatability, reliability and OEE or ‘overall equipment effectiveness’. We need a machine tool partner who is ultra-responsive.”

He continues: “We are demanding because our customers are demanding, but we appreciate that Mazak knows that if something goes wrong, we need it sorting as soon as possible.”

In the future, Mr Brown believes that further investments in technology and people will be the key to maintaining success. “I can see us making further machine investments, probably with more VTC800 capacity.”