General Atomics Aeronautical Systems, Inc. (GA‑ASI) and GKN Aerospace have declared their intent to collaborate on composite tails for GA-ASI’s Predator® B Remotely Piloted Aircraft (RPA) series via a Letter of Interest (LOI) signed at the Farnborough International Airshow.

Linden Blue, CEO of GA-ASI said: “We are pleased to expand our relationship with GKN Aerospace as part of our growing industrial collaboration team in the UK. We have seen the results of GKN Aerospace’s extensive experience in advanced composite manufacturing first-hand and look forward to working with its team.” 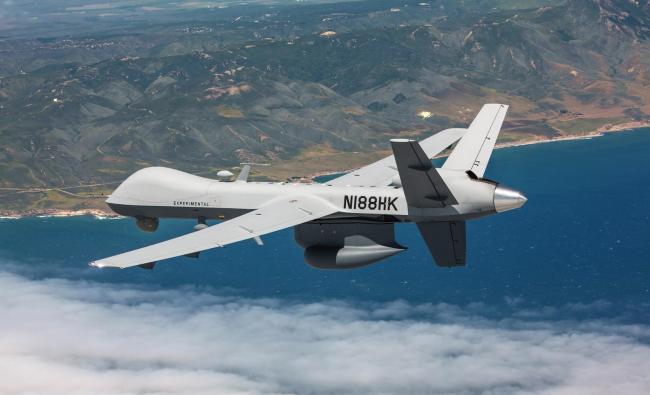 Tails for the Predator B Series aircraft are to be built in the UK by GKN Aerospace / Picture: GA-ASI

GA-ASI has been partnered with GKN Aerospace’s Fokker business unit in the Netherlands since 2016 for production and sustainment of Predator B/MQ-9 Reaper® landing gear subsystems. In April of this year, GKN Aerospace Deutschland and GA-ASI entered into a Technical Assistance Agreement (TAA) to expand GA-ASI’s carbon-composite manufacturing capabilities significantly by manufacturing major aerostructures for MQ-9B SkyGuardian, the latest evolution of the multi-mission Predator B, in Germany.

Following the successful completion of the required technical and commercial evaluations and agreement, GA-ASI also intends to perform composite manufacturing for Predator B tail structures at GKN facilities in the UK.

Michiel van der Maat, vice president business development defence, Aerostructures and Systems Europe and Asia of GKN Aerospace added: “We are proud to have the opportunity to be involved in the manufacturing of a key component of the proven Predator B aircraft family. Our goal is to deliver structurally lightweight composite tails to GA-ASI that meet the highest certification standards while delivering best in class performance.”