There to help mark the occasion and cut the ribbon were Amtico Group Directors, management and long standing staff member Mo Farooq – who has worked for the company for over 44 years. Also in attendance were contractors who worked on transforming the facility, as well as key customers. 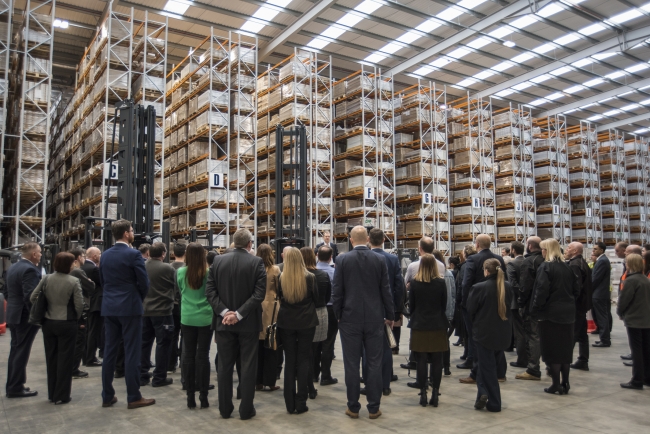 Amtico’s CEO and Regional Chairman of the West Midlands CBI, Jonathan Duck, said: “Amtico is a forward thinking company with ambitious growth plans over the next few years. We’re incredibly proud to have our roots in Coventry and play our part in the UK’s export led economy, so securing this site for all of our logistics, warehousing and training is incredibly important. It is sure to have a positive impact on Amtico’s future.

“The team has worked incredibly hard to create a fully functional, state-of-the-art facility in such a short space of time, so I’d also like to take this opportunity to thank them for their amazing dedication and effort.”

Attendees were given a guided tour of the facility, which detailed how the building has been specifically developed to house and distribute 15,000 pallets to over 47 different countries. On average, 214 pallets will leave Pilot Park’s doors every day, using Amtico’s dedicated delivery service vehicles.

The new showpiece building has also been constructed with the environment in mind, featuring solar panelling on the roof, cyclonic water irrigation system, bio digester and electric charge points for employee cars. During the transitional process of moving to Pilot Park, Amtico has invested in over 1,133 hours of staff training and awarded 83 fork lift driver licenses.

The position of Pilot Park is in close proximity to Amtico’s existing factory, allowing the company to retain staff and continue to support the local community. As the largest manufacturer in the area, Amtico currently employs over 400 staff at its head office in the north of Coventry.

• Amtico has invested in 24 paid internships in the design team over the past 7 years, as well as 10 apprenticeships across its manufacturing/engineering activities in the same time scale.

• Amtico’s Coventry manufacturing facilities produce over double the volume they did 5 years ago, and 4 times as much as 10 years ago.

• If every pallet in the Pilot Park warehouse was lined up end to end, they would reach to Amtico’s Solihull facility.

• Amtico delivery vans travel the equivalent mileage of driving around the world 39 times a year.

• The forklift trucks used on site are all electric instead of diesel or gas.

• By moving to the new facility, Amtico has successfully reduced the average ‘product journey’ from 95 miles to 4.5 miles.