Dero Fabrication is well-known amongst machinery suppliers to the food and pharmaceuticals sector and a new acquisition promises even further growth.

The name Dero Fabrication is misleading because, when you visit the company’s 10,000 sq ft facility in Worcester, there is much more than just fabrication going on. is well-known amongst machinery suppliers to the food and pharmaceuticals sector and a new acquisition promises even further growth.

The company was founded in 1977 as a maintenance fabricator, but over the years has found that there was increasing pressure from customers to bring everything in-house. “We were spending a lot with sub-contractors to cut the sheet metal profiles, but we needed quicker turnaround times and that meant bringing everything in-house,” says Production Manager James Taylor, whose father, John, owns the business.

The company now offers an end-to-end service for customers, from conception through to design, product development, prototype work and finally production. Most importantly, Dero provides all the services required without resorting to subcontracting, including laser cutting, assembly, welding, fabrication and finishing. 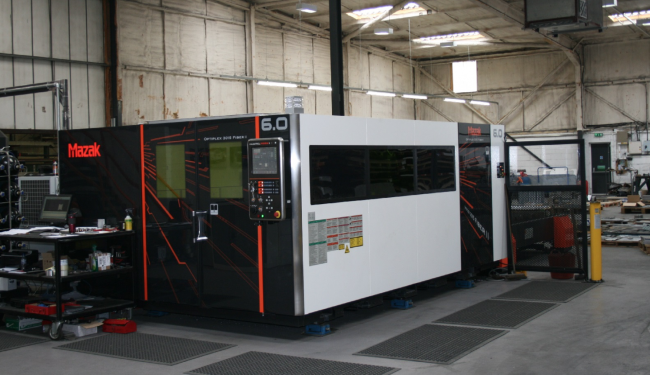 The introduction of laser cutting technology in 2004 was crucial. “That was a big step for us and enabled us to carve out a very strong position in the food and pharmaceuticals sector,” says James.

The move has paid dividends, particularly with the increased focus by the major food producers and supermarkets on checking and weighing systems. “Food production is all about weighing, measuring, x-raying, filling and capping,” says Chris Beese, Sales Manager at Dero. “The supermarkets in particular are very concerned about checking, because they need to protect their brand. They want protections in place to ensure that no metal enters the food chain and that pressure has gone down the supply chain to the food manufacturers. We’ve been able to provide a key part of the solution, namely the sheet metal work in the form of guards, chambers and basic shells for the metal detectors that sit on the food production lines.”

The company now manufactures everything from gantries and stainless steel frames, through to guards and chambers for food process equipment. In tandem, Dero has also developed a specialism in ultra-high standard finishes that are particularly valued by the pharmaceutical sector, including powder coating, galvanising, glass bead blasting, plating, anodising, chemical blacking and a number of bespoke finishes.

“For example, the pharma[ceutical] sector often wants a gloss finish so we developed that capability,” says Chris. “In fact, we are now recruiting more people to make sure we don’t have to subcontract at all. That’s really the ethos of our business. We find it’s better to have control, particularly with finishes as customers don’t want sharp edges, particularly where there are lots of hands being used in the production process.”

However, with growth has come pressure on production. “The 4kW CO2 laser we had was struggling to keep up with our production demands,” says James.

The answer was to acquire a Yamazaki Mazak OPTIPLEX Fiber 6kW laser, “It’s so much quicker,” he says. “We were running the old machine for 10-12 hour shifts, five days a week, but with the Mazak we are only scheduling eight hour shifts and getting through the same amount of work. In short, we’ve increased our capacity and our ability to cut much thicker sheet metal, but still only have one machine and one operator.”

James continues: “What’s more, with the old machine, our stainless steel cutting topped out at 12mm, but the Mazak is capable of 25-30mm stainless. Prior to installing the new machine, we would have to send out 25mm thick stainless steel for water jet cutting, which is the most commonly used process for jobs using thick sheet, but it is also very expensive.”

However, what is particularly unique about Dero’s relationship with Mazak, is the company’s position not only as a customer but also as a supplier. “We’ve been working for and with Mazak for many years now, to provide further support to their own factory which is located less than a mile away from our own,” adds James. “I think there is something really special about the parts for one Mazak machine being made by another Mazak machine. It comes full circle and shows the quality and precision of the equipment.”

Yet, the OPTIPLEX has also opened up new markets for Dero. “We have one client who previously used water jet. They would send components out to the water jet company and then get it back for machining and finishing. We are taking over all of the processes and quoting it as a package, including framework and cabinets. We send them machine fabricated parts that they can just bolt together,” he adds.

“Everyone has a laser, but not everyone has a laser that is as flexible as this. Being able to complete thicker work in-house gives potential customers the confidence that we’ve got control of everything, rather than having to subcontract. This is particularly important in pharma. As a capacity-selling tool it’s second to none.”

James has also been impressed by how quickly his operator has adjusted to the new machine. “Our laser operator was used to a different CNC, but he went over to Mazak for training and has picked it up very easily. It is a complex machine because of its capabilities, but it is clever at the same time. There are things you can do on the OPTIPLEX that you can’t do with other machines.”

He continues: “There is always a concern when you introduce new machinery, because the worst thing that could happen to us is have the laser go down. We even kept the old laser for a few months just to make sure, but overall the transfer to the Mazak was easy. We got a lot of training, a lot of support and ultimately it was quite painless.”

Dero’s latest acquisition to support the OPTIPLEX is a nitrogen generation system. “The new system will ensure we always have a constant supply of nitrogen gas for the Mazak and will enable us to cut mild steel up to 6mm thick with no oxidised edge. The latest investment will make us self-sufficient, increase capacity and improve quality.”

He concludes: “We’re probably the busiest we’ve ever been in the company’s history, but it’s no good making leaps and bounds, taking on more but ultimately letting people down. We take a view that we take on no more than we can handle but then work out how we can increase capacity further. The new OPTIPLEX is a perfect example of this philosophy.”