Swansea-based engineering firm, Envico Engineering, has thrown its weight behind BBC One’s DIY SOS: Grenfell Special, which sees a state-of-the-art boxing gym and community centre being built to replace the Dale Youth Boxing Club that was destroyed in the fire, in Ladbroke Grove.

The Dale Youth Boxing Club and North Kensington Community Centre will be reinstated under the nearby A40 Westway, with Prince William due to join the volunteer team which is bringing the project together. The resulting build and unveiling will be shown over two episodes of the programme, later in the year, with all the contributors invited to the big reveal. 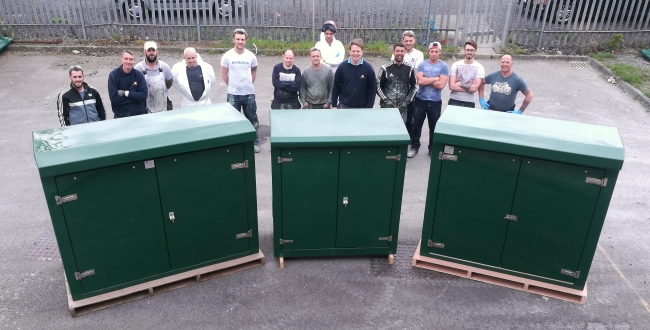 Envico Engineering has donated and delivered a GRP metering cabinet to the site as part of the DIY SOS project / Picture: Envico

The Dale Youth Boxing Club was founded 60 years ago and operated in Grenfell Tower since 1999. Over the years, it has nurtured 200 Amateur Boxing Association champions and helped hone the talents of the 2008 Beijing Olympic gold medal winner, James DeGale, as well as current world champion George Groves.

Envico Engineering, which, along with its parent company Morgan Marine, designs, engineers and manufactures steel and GRP (Glass Reinforced Polymer) security housings and enclosures designed to protect Critical National Infrastructure, has donated and delivered a GRP metering cabinet to the site, to support this important project.

Morgan Marine’s Group Director, Martyn Ingram said: “We were all troubled by the Grenfell Tower disaster and by the lasting effect it has had upon the community in Ladbroke Grove, and I am pleased to see the team at DIY SOS take on the challenge of helping to improve the lives of some of those affected.

“Here at Envico Engineering and Morgan Marine we are pleased to be playing a small part in the project. We were approached by a building company which is involved in the construction, and we were happy to donate and deliver one of our GRP metering cabinets to the site, to support this.

“I’m pleased to hear that Prince William is due to join the DIY SOS volunteer team for this TV special, to lend his support, and I look forward to watching DIY SOS when the results of the build are revealed.”