Harvey Water Softeners has been chosen by HM The Queen as winner of The Queens Award for Enterprise in Innovation for 2018.

The family-run manufacturing firm has been awarded the UK’s most prestigious business award for its innovation of the first compact, non-electric block softener.

This year is the 52nd year of the Queens Awards, which are announced on April 21st every year to mark the birthday of HM The Queen. 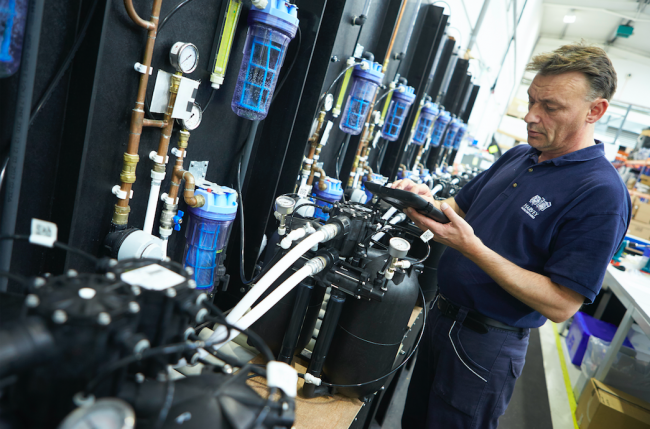 Harvey Water Softeners is the UK’s largest manufacturer of compact water softeners. It sells thousands of softeners every year to households across the UK and around the world.

Founder of Harvey Water Softeners, Harvey Bowden, said: “This is amazing. When my wife Ann bought a water softener 43 years ago I never expected to end up with an award from HM The Queen. It’s wonderful. Our first goal was just to earn a living, then to make a better water softener and finally to build the best water softener in the world. We have a wonderful family company of people here and it’s a pleasure to work with them all. Thank you your Majesty!”

The award-winning HV3 solves the problem of limescale build up for the large proportion of UK homes located in hard water areas.

Invented by Harvey Bowden, it was the first water softener designed to fit under a kitchen sink with two cylinders that allowed for continuous softening.

As well as recognising the significance of this invention to the water softening industry, The Queens Award was awarded to Harvey on the back of the company’s recent impressive sales growth.

The Woking-based firm reported sales of £26.5m in the 12 months to December 2017, a 25% increase on the year before as a recent multi-million pound R&D investment programme helped to increase factory output by a third (28%).

After posting double-digit growth for eight out of the last nine years, Harvey is forecasting sales in excess of £30m by the end of 2018, with a quarter of that coming from exports.

Managing director of Harvey Water Softeners, Martin Hurworth, added: “40 years on, we’re growing faster than ever, breaking factory records for numbers of softeners made and modernising our business to meet growing consumer demand. We’ve invested in our people, our products and our production lines and that’s really showing through in our sales figures, staff and customer satisfaction and our burgeoning reputation as a great British manufacturing business.”

Harvey Bowden, pictured in 1978 when he founded the firm / Picture: Harvey Water Softeners