Integral e-Drive, the electric drives division of Integral Powertrain has announced it has collaborated with Volkswagen Motorsport as e-Drive technology partner for their pioneering, fully-electric racing car: The I.D. R Pikes Peak.

Driven by world-class driver and defending Pikes Peak champion, Romain Dumas, Volkswagen Motorsport I.D. R Pikes Peak challenger is set to push the boundaries of innovation and technology to take it over the finish line some 19.99 kilometres and 1,440 meters in altitude from the start line. The goal, to set a new world record for electric cars at the finish line some 4,302 metres above sea level. The current record in the class of electric prototypes is 8 minutes 57.118 seconds, which was set by the New Zealander Rhys Millen in 2016. 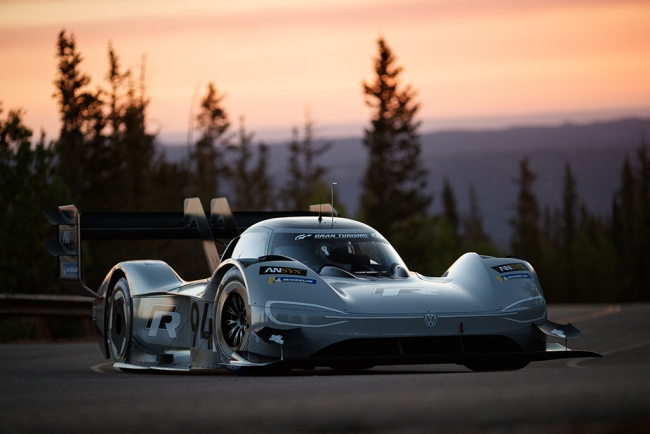 With 500 kW (680 PS), 650 Nm of torque and weighing less than 1,100 kg, the super-sports car will take on the iconic Pikes Peak hill climb in Colorado Springs, USA / Picture: Volkswagen Motorsport

With its high-power, high-downforce, low-weight philosophy the I.D. R Pikes Peak promises to redefine the limits of electric race performance. Two compact battery blocks sit beside and behind the driver, ensuring perfect weight distribution and provide the energy for each of the Integral e-Drive motors on the front and rear axles. Torque distribution is managed electronically.

Volkswagen Motorsport Director, Sven Smeets said: “The project is an important milestone in our new motorsport orientation. Our team is literally electrified about taking on this incredible challenge. Volkswagen last participated in the Pikes Peak mountain race in 1987 with a spectacular twin-engined Golf which barely missed finishing.“

Collaboration on this project builds upon the well-established and continually growing reputation of Integral e-Drive to design, validate and manufacture some of the world’s most technically advanced, high performance e-Drives for both Automotive and Motorsport sectors. Focussed on high performance electric motor technology, the proprietary core technology is configured to deliver world class leading e-Drives exactly matched to the performance and package requirements of the project.

Arnaud Martin, Chief Engineer Motorsport of Integral Powertrain added: “We at Integral Powertrain have always pushed the boundaries of e-drive technology working with clients around the world to find the best solution to meet their exact requirements. There is no doubt that the future of motorsport is in electric powertrain and IP is pleased to have been chosen to provide the power units for this incredible car. The project brought many technical challenges which the IP team has met face on to ensure the I.D. R Pikes Peak challenger has every opportunity of breaking the world EV record on Sunday”

Smeets concluded, “The I.D. R Pikes Peak represents an extremely exciting challenge for us, to show what is possible with an electric car in motorsport. We rely on Integral e-drive as a strong partner in the development of the highly sophisticated electric motors. The entire team behind our driver Romain Dumas is highly motivated to set a new record for electric cars”