Congratulations goes to Stuart Haydock from Chorley based Lyndhurst Precision Engineering, the May Manufacturing Apprentice of the Month,

Nominated by Managing Director, Mark Marriner, Stuart scoops the prize ahead of his peers and receives £100 Amazon Vouchers as a reward. Stuart now qualifies for the AMI UK Manufacturing Apprentice of the year joining the previous and future winners of 2018.

Stuart said “I’m very proud to receive this, it was unexpected but I’m really chuffed!”

The competition has been launched to find and recognise the very best apprentices currently working within the UK manufacturing industry. The initiative set up AMI, a web design & marketing agency that specialises in supporting UK manufacturing companies. 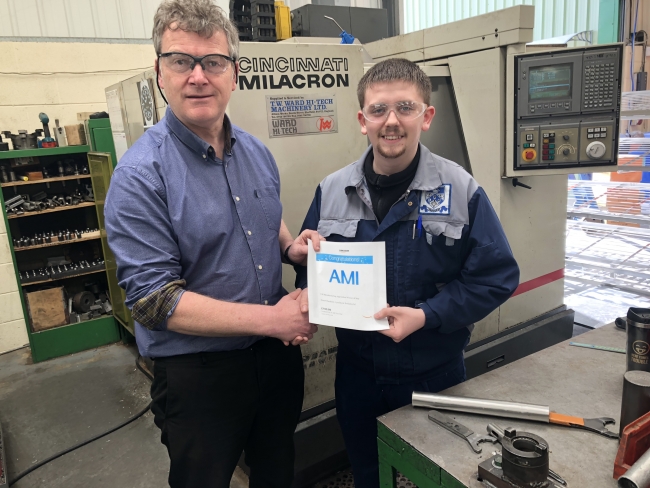 Stuart joined Lyndhurst as an advanced apprentice in engineering having gained a B-Tech level 3 (with distinction) in engineering at his local college. He had already enrolled on HNC in engineering which showed how enthusiastic he was.

Stuart has since gone to complete his HNC and is now taking his HND, this all alongside his advanced apprenticeship, which demonstrates considerable time management and self discipline.

When asked about the technical skills Stuart has learnt as an apprentice, Mark Marriner said “Stuart has moved from the manual machines to one of our CNC machining centres and has shown an excellent attitude to, and aptitude for, learning. We know Stuart to be extremely diligent and conscientious in all he does and he has a high skill level for one so young. Along with the rest of the team, he has worked on developing and manufacturing components for the nuclear, aerospace, automotive, defence and medical industries, many of which are major international blue chip companies.”

“We put forward Stuart for the accolade as we feel that Stuart’s attitude and work ethos is highly commendable and he sets an example to the rest of the team, particularly the younger engineers. He is without doubt a valuable and respected part of our high performing team,” added Mark Marriner, MD.

Like many young people in the UK finishing school, Stuart had plenty of career options to choose from, but an advanced engineering apprenticeship was the path for him. When asked, Stuart added, “I feel that an apprenticeship, particularly an advanced apprenticeship, was the best thing I could have done. I have been able to continue my education with support from Lyndhurst Precision Engineering and I feel that I am part of a family here, that I make a valued contribution to the company and my team mates. I’ve been lucky in that I’ve been able to earn a decent wage as well escape the student debt trap”

Finally, Mark said “Stuart is an exceptional young man in whom I have every confidence in. He has a very bright future ahead of him. We at LPE rely on young people like Stuart, as does the U.K. manufacturing and engineering industry.”

The apprenticeship levy is up for debate at the moment with increased levels of uncertainty, so when asked on the importance of apprentices, Mark added “Apprentices are vital to us at LPE, and to engineering and manufacturing in general.  We have taken on apprentices for the last 15 years or so and will continue to do so despite changes in funding. They bring new life and ideas as well as continuing the traditional skills which are in danger of being lost forever.”