Mondelēz International has officially unveiled the finished four new state of the art production lines, the results of a £75m investment, at its iconic Bournville site in Birmingham, the world-famous home of Cadbury.

Work to implement the new lines started in 2014 and today the Cadbury Dairy Milk tablet lines produce up to eight tonnes an hour, making 900,000 200g bars or 1.2 million 110g bars per day. While the Cadbury Roses and Heroes lines produce up to six tonnes an hour, making 13 million sweets per day. The investment has secured modern manufacturing in the UK for the next generation.

£75m has been invested since 2010 in updating the lines / Picture: Mondelēz

Glenn Caton, President of Northern Europe at Mondelēz International, said: “This £75 million investment we’ve made means our Bournville factory can now favourably compete against manufacturing facilities in other European markets and retain the majority of Cadbury Dairy Milk and Cadbury chocolate production right here in the UK. Previously it cost three times more for us to make a chocolate bar here in Bournville than it did in Germany. That wasn’t sustainable. That’s why our investment in these world class production lines is so vital. In total we have invested £200 million in our manufacturing operations and R&D facilities across Britain to ensure we continue to make the nation’s favourite treats in the UK for years to come.

“We are proud to be the custodians of Cadbury and remain committed to the delicious taste and high quality of our brands. Our Bournville factory is not only an integral part of a thriving, modern British manufacturing sector, it is the home of Cadbury and heart of chocolate manufacturing to our global business. We don’t just make delicious Cadbury products at Bournville, we also invent them here. Every single chocolate product, wherever in the world it ends up being sold, starts life, in one form or another, in Bournville.”

Andrea Leadsom, Secretary of State for Environment, Food and Rural Affairs, commented: “This £200 million investment into world-class production lines in the UK, including at the Bournville site, is a real vote of confidence in the UK as a great, global, trading nation and the ideal place to do business.

“Our thriving food industry is the largest manufacturing sector in the UK – bigger than cars and aerospace combined – which is why we remain committed to supporting investment and championing the excellence of British food and drink at home and abroad.” 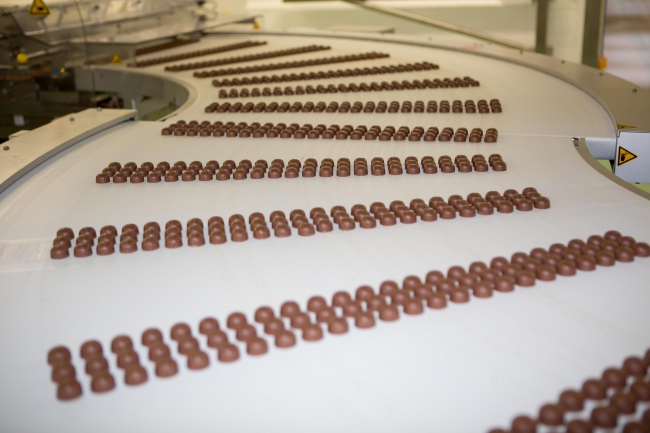 Bournville is the home of Cadbury Roses / Picture: Mondelēz

• Opened in 1879 after George and Richard Cadbury moved manufacturing from the centre of Birmingham
• Home to Mondelēz International’s Global Centre of Excellence for Chocolate research and development, including its innovation kitchen where all Cadbury products across the globe are invented
• They have a total of 21 lines at the site which make products such as Giant Buttons, Wispa, Easter egg shells, Caramel nibbles and Caramel eggs
• Produces five and a half million blocks of Cadbury Dairy Milk, 400 million Cadbury Dairy Milk buttons, over a million Wispa bars, and 1.2 million Creme Eggs every day
• Supported by satellite sites in Chirk and Marlbrook, where the Ghanaian, sustainable cocoa beans are processed and fresh British milk is added.
• Investment in the UK is ongoing, which also includes investment into the local communities surrounding their sites. In the Greater Birmingham area the companies £3 million Health for Life programme has reached a total of 127 schools and 15 community growing spaces, equipping over 150,000 people with the knowledge and skills to lead healthier lifestyles. Through the Cadbury Foundation the firm also donated over £600,000 to registered charities in 2016.
• Mondelēz International is home to some of the world’s most iconic brands including Cadbury, Maynards Bassetts, Trebor and Ritz, and employs 4,000 people at locations in Sheffield, North Wales, the West Midlands, Devon and Uxbridge.