Eighteen youngsters began their steel industry training this week with a warm welcome from some of the fourteen veterans who started their own steel careers on the same day 40 years ago.

The new apprentices reported to Liberty Speciality Steels’ training centre at Stocksbridge for the start of a three-year learning journey towards becoming qualified technicians in the flagship industry.

They are among the latest intake of 31 young people – including 11 graduate trainees – who will join a new generation of workers for the steel sector at Liberty’s Rotherham and Stockbridge works and related steel service centres in Bolton and Wednesbury. 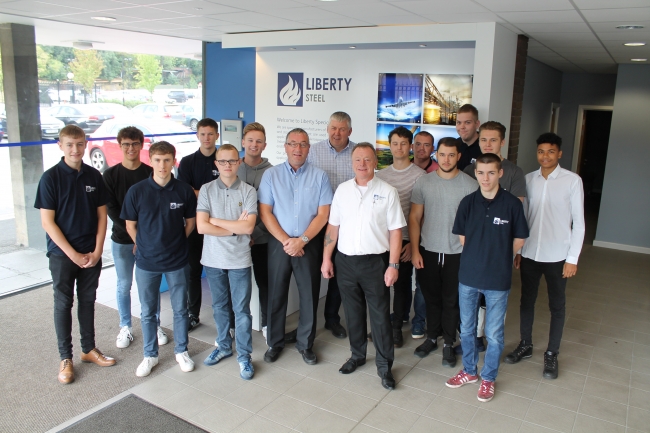 Waiting to meet them this week were section engineer, Carl Firth, mechanical services manager, John Littlewood, and production manager, Paul Kendrick, who are among 14 Liberty Speciality Steels workers who started together as apprentices on the same day in 1978 and have now clocked up a collective total of 560 years in the industry. All are now managers and engineering supervisors, forming the backbone of the skilled workforce at Speciality Steels.

One of the long servers, John Littlewood said he was ‘hugely encouraged’ to see bright young people still eager to join the steel industry. He said: “We’ve seen a lot of changes in the industry over four decades and there are far fewer people working in steel now than when we joined, but there are still great careers for young people in the sector.

“Over the past few months we interviewed numerous candidates and selected this group to have the same opportunity we had many years ago to develop high-level engineering skills in a dedicated training facility. We’re looking forward to passing on our knowledge and experience; coaching and guiding them to achieve their full potential and forge a successful career in steel like we’ve had,” John added.

Liberty human resources director Mick Hood said: “It’s not often that we see so many people who started work together on the same day still working for the company 40 years later. It’s a great achievement to think that, between them, they have contributed more than five centuries of service to the business and all progressed to senior and highly-responsible positions.”

He added: “It’s also encouraging to think how much knowledge and experience they have to pass on to the young people starting their apprenticeships this week. We can only hope that the new joiners will enjoy that same rewarding careers as these steel stalwarts.”

Most will spend a year at the state-of-the-art training centre which Liberty runs with Sheffield College at the company’s Stocksbridge works, followed by two years on attachment to different departments and then a more focused period in areas of the business where the apprentices might want to work longer term once their training is complete.

Apprentices acquire formal qualifications during their training and some are later supported by the company to undertake university degrees part-time and become fully-fledged chartered engineers.

In addition to Liberty’s own apprentices, the training centre at the Stocksbridge plant is used to develop the skills of young people employed by other industrial businesses around the Sheffield area.

GFG Alliance companies worldwide have an extensive programme of apprentice training and through the GFG Foundation – a registered charity – are also heavily involved in programmes to get school-age young people interested in industrial careers. This includes delivery of the Industrial Cadets programme in South Yorkshire and elsewhere in the UK