Airbus has been selected by Eutelsat, one of the world’s leading satellites operators, to build two HOTBIRD new generation telecommunication satellites that will replace the current spacecraft and enhance capacity at Eutelsat’s premium broadcasting position. Components and major parts of the assembly will be built in the UK.

The two satellites will deliver improved performances over the European and Middle-Eastern footprint, reinforced by a powerful European Superbeam. 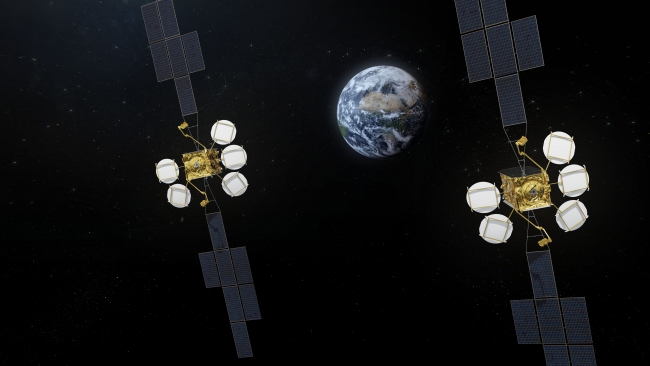 Airbus to build new generation of broadcast satellites, components and major parts of the assembly will be built in the UK / Picture: Airbus Defence & Space

The satellites combine electric power of 22 kW with a launch mass of only 4,500 kg, thanks to the EOR (Electric Orbit Raising) version of the Eurostar Neo platform.

They will ensure full-service continuity over the operational 102 Ku-band transponders/frequencies, secure deployment and capacity redundancy at the HOTBIRD position. The HOTBIRD fleet forms one of the largest broadcasting systems in Europe, broadcasting 1,000 television channels to more than 135 million homes in Europe, North Africa and the Middle East.

Due for launch in 2021, they will be the ninth and 10th high power all electric Eurostar satellites, harnessing multiple electric propulsion thrusters for faster orbit raising and on-station manoeuvres.

Nicolas Chamussy, Head of Space Systems at Airbus said: “The continuing confidence of Eutelsat in our products means that they are now the launch customer for Eurostar Neo which will be our new flagship telecommunications satellite. They have been our key partner for most of our firsts, including Eurostar E2000+ and Eurostar E3000, as well as electric orbit raising.”

Eutelsat CEO Rodolphe Belmer added: “We are delighted to sign this contract with our long term partner Airbus. It marks another milestone in our objectives to provide customers with premium satellite technology with the highest level of performance, and to expand reliability and service security at the 13 degrees position, which has been our leading neighbourhood for over 20 years, serving Europe, the Middle East and North Africa.” Airbus Defence and Space 81663 – Munich Germany Email: media.airbusdefenceandspace@airbus.com Web: airbus.com Follow us on twitter: @AirbusSpace Page | 2

Nicolas Chamussy concluded: “Eurostar Neo combines innovation with tried-and-tested technologies, resulting in a product line that will be as reliable as ever while delivering the best performance in the market. Eurostar Neo will be produced within the digital factory 4.0, a completely new way of manufacturing which will guarantee end-to-end data continuity up to the final in-orbit test results.”