I understand
Home•Case Study: How one snack...

Case Study: How one snack food manufacturer optimised its production lines and processes

To increase efficiency and safety, the snack food manufacturer Poco Loco decided to optimise its production lines and processes together with Pilz. Since the retrofit, the configurable safe small controllers PNOZmulti 2 guarantee the consistently good and safe production of delicious tortilla chips.

With its range of products, Poco Loco from Roeselare in Belgium is one of the market leaders in the area of Tex-Mex products. To be able to offer a wide range of products, efficient manufacturing processes are absolutely necessary. The manufacturing process for tortilla chips starts with the measuring and mixing of the ingredients. Then the dough is processed by an extrusion press and sheeter. Following the drying process, the snacks are fried in the hot oil of a deep fryer to then be seasoned and – after passing a quality check – packaged for the customer. A comprehensive production process with specifically defined process steps that the interlinked plant must execute precisely in a coordinated manner. 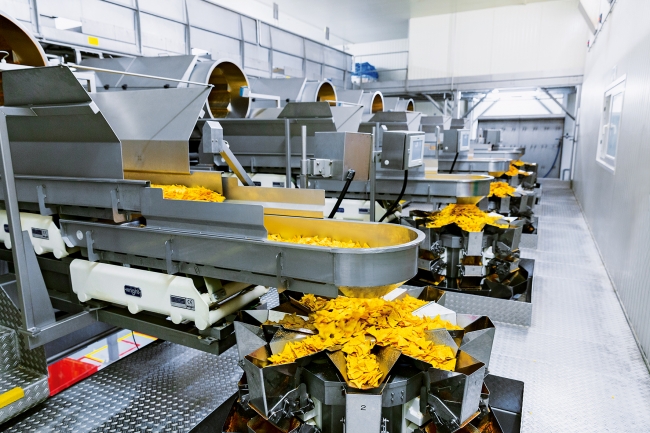 The solution from Pilz not only made the production line safer, but also more efficient. The time required for both the engineering and the troubleshooting was reduced considerably / Picture: Pilz

Better control as part of a whole

“The decentralised control of the plant led to difficulties in the past,” reports the PLC programmer Jeroom Verstraete from Poco Loco, “because the interlinked production line was installed by different machine builders and the plant control was also a combination of various PLCs and safety relays.” The machines were designed as separate units – cumbersome handling not only on the control level. Every plant section, for example, had its own emergency stop circuit which led to the emergency stops at times shutting down safety zones independently of one another. Francky Maveau, Head of the Electronics department at Poco Loco, describes an-other major disadvantage: “When all emergency stops are activated in series for one safety controller, it is often difficult to exactly pinpoint the problem in the event of failures. This frequently led to longer downtimes.” It became clear to the snack maker: not only a safe production line but also more efficient operation should be the goal.

Always a safe view of production

After the retrofit by Pilz, visualisation of the entire system is designed so that problems can be detected early and do not have any major effect on the overall process. The small controller PNOZmulti  2 has a technical solution for this problem in that every safety component is assigned a unique DIAG address (Dynamic Information and Action Gateway address) via the software. Information can thus be transferred via a fieldbus system to the higher-level controller. These are prepared for diagnostics and shown on the display of the small controller as status messages. This can directly transfer up to 20 different messages irrespective of the higher-level plant control system.

Technicians can thereby perform diagnostics immediately without having to connect a laptop for more detailed diagnostics. With the configuration tool PNOZmulti Configurator, at Poco Loco not only the technicians responsible for the programming of the PLC but also other technical employees can create a PNOZmulti program and even modify one with corresponding authorisation. To do so, the entire technical department at Poco Loco received training in the set-up and operation of the system. At the same time, the PNOZmulti Configurator can be used for easier diagnostics of an error when troubleshooting.

The motion management for the plant was also optimised with regard to safety and diagnostics: The production line was converted to drives with frequency converters that are equipped with the STO function (safe torque off). If an emergency stop is triggered, the connection via PNOZmulti 2 ensures that the drive is stopped in a controlled manner via the STO function. A number of safety switches are installed on the interlinked production plant for tortilla chips in addition to fifteen emergency stops. The production line itself is divided up into zones so that shutdown in one zone has no effect on another zone. The deep fryer can continue to work, for example, when there is an error at the start of the line.

The modernisation was able to optimise the entire production process for the long term, with safety as standard. The central control component ensures that the downtimes decrease, and the production efficiency increases.