I understand
Home•Battery business charges up for...

Battery business charges up for growth

Telford-based battery pack manufacturer and distributor AceOn Group is to increase its capacity, operational efficiency, productivity and workforce following a period of sustained growth which has enabled it to successfully secure a grant from the Marches Local Enterprise Partnership (LEP).

The grant, worth £80,000, is part of the Marches Building Investment Grant (MBIG) which is part-funded by the European Regional Development Fund.  It is aimed at funding extensions, renovations and reconfigurations to commercial premises so that businesses can realise growth. 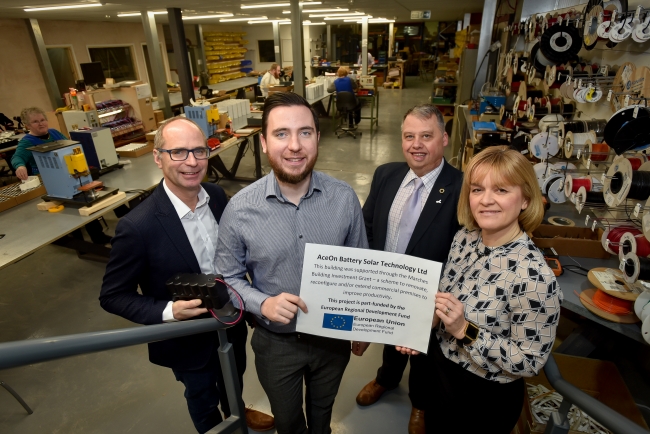 For AceOn Group, this means that a much-needed extension to its existing facility has been made possible – a development which will transform its future growth potential.

Founded in 2010 by a team with over 25 years’ experience in the battery industry, AceOn Group has enjoyed significant growth since and the future prosperity of the business was hinged on it being able to scale up quickly.

Sales Director, Alex Thompson said: “Increased focus on, and importance of, electric vehicles and energy storage methods have meant that the entire battery sector has grown phenomenally in recent years.  Our depth of experience in the market meant that we were well placed to capitalise on this growth, but soon after we set up in Telford, we knew that physical expansion would be necessary to fully realise this.

“Owning the land that our existing facility stands on meant extending was always in our sights, but we realistically couldn’t take this forward until sufficient funding was in place.”

As members of Telford Business Board, Alex and his fellow Directors at AceOn found out about the MBIG funding and decided to look in to whether it would meet their needs.

He added: “The application process for this funding was rigorous but given the amount we’ve been awarded, it needed to be, and we certainly didn’t find it unduly onerous.  Simply, without it we’d have not been able to expand our facilities, take on more staff and put the foundations in place for what we’re confident is a period of continued growth.”

“This type of support really does make the difference between remaining static and enjoying sustained growth and its great to see AceOn bringing new employment opportunities to Telford.”

Three new jobs have already been created because of AceOn’s expansion and it is anticipated that another three will be confirmed in the coming few months.

Caroline Cattle, Grant Manager concluded: “The team at AceOn has utilised its depth of experience in the battery market to grow a business that continues to have ambitious future growth aspirations.  It is a small organisation that has demonstrated a commitment to the fundamentals of business growth, but which has required support to make its visions a reality.  It has been a pleasure to support them through this process.”