The Belfast team behind an innovative, resin-infused advanced composite aircraft wing that minimises the environmental impact of commercial jets, has been named the winner of the MacRobert Award 2019 by the Royal Academy of Engineering.

Her Royal Highness The Princess Royal, as Royal Fellow of the Royal Academy of Engineering, presented the MacRobert Award to the team of engineers from Belfast-based company Bombardier in the 50th anniversary year of the UK’s most prestigious engineering prize. 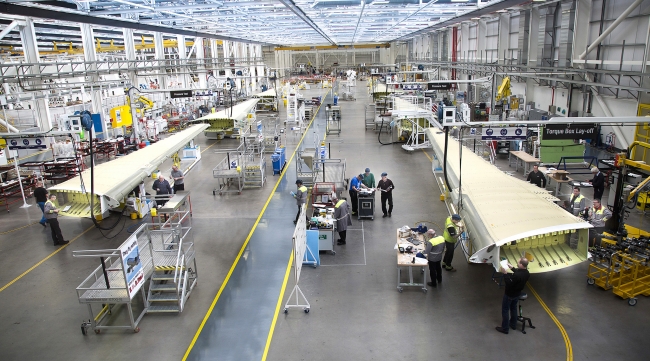 The Royal Academy of Engineering named Bombardier winner of its prestigious MacRobert award for its innovative, resin wing, which minimises the environmental impact of commercial jets / Picture: Bombardier/RAEng

Bombardier’s innovative, resin-infused advanced composite aircraft wing underpins the Airbus A220 and is the first certified commercial aircraft wing made using resin transfer infusion (RTI). The RTI process sees a complex structure created by placing dry fabric into moulds before impregnating it with liquid resin, which then sets into shape under heat and pressure. While other processes involve pre-impregnated carbon fibre requiring intensive refrigeration before manufacture, the RTI process uses less energy, fewer parts and results in a lighter wing. Compared to a conventional metal wing, Bombardier’s carbon composite wing is approximately 10% lighter helping to reduce fuel burn in flight, with an accompanying reduction of CO2 and NOx emissions.

The £520 million investment in Bombardier’s aircraft wing programme is the largest ever single inward investment in Northern Ireland and around 200 suppliers across the UK are directly involved with the programme alongside many others throughout the supply chain.

Bombardier was chosen from a shortlist of four finalists that included Darktrace, M Squared and OrganOx.

Founded in 1969, the MacRobert Award is overseen by the Royal Academy of Engineering and is the UK’s longest-running engineering prize.

The Award honours the winning organisation with a gold medal, and the team members with a cash prize of £50,000. It recognises engineering teams that demonstrate outstanding innovation, tangible societal benefit and proven commercial success within the UK engineering sector. 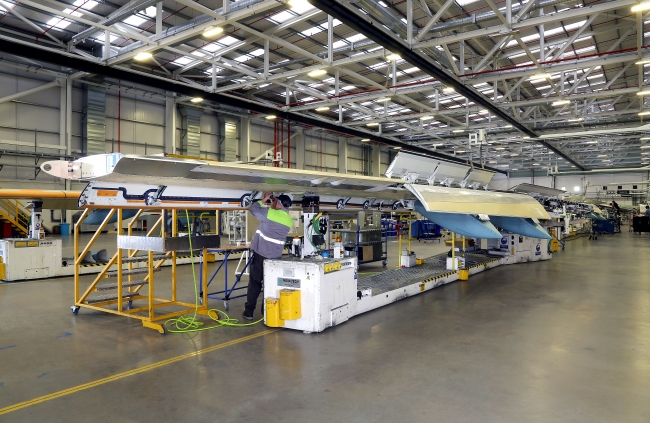 Dr Dame Sue Ion DBE FREng FRS, Chair of the Royal Academy of Engineering MacRobert Award judging panel, said: “The four finalists reflect the very best of UK innovation today, from mechanical, chemical, materials and optical, to medical and digital engineering. Each entry represents a significant advance in their respective fields and provides a glimpse of how engineering will shape the world over the next half century. They demonstrate UK engineering talent at the top of its game.

“Bombardier’s composite wing reflects how excellence in aeronautical engineering benefits both society and the environment. At a time of uncertainty for Belfast’s engineering community, we hope this award helps them achieve the worldwide recognition they deserve.”

Michael Ryan CBE FREng, Chief Operating Officer, Aerostructures, Bombardier Aviation, added: “Bombardier Belfast is thrilled to win the Royal Academy of Engineering’s 2019 MacRobert Award. It’s a fantastic recognition of our highly-skilled workforce, who have created a unique, cutting-edge technology to produce composite wings in Belfast which fly on commercial aircraft around the world.  I’m extremely proud of our employees’ engineering innovation, the significant support of our supply chain, and of Northern Ireland as a global leader in aerospace technology.

“We’ve been developing our advanced composite expertise in Belfast for half a century and it’s an immense honour to receive the gold medal in the MacRobert Award’s 50th year.”

The four finalists for the 2019 MacRobert Award

• Bombardier (Belfast) for developing an innovative, resin-infused advanced composite wing that minimises the aircraft’s environmental impact by reducing both weight and fuel burn in flight, and waste during manufacture.
• Darktrace (Cambridge) for Antigena, an AI-powered ‘self-healing’ cybersecurity system that can both identify and neutralise cyberattacks.
• M Squared (Glasgow), whose SolsTiS Titanium:Sapphire laser produces the world’s purest light and can be tuned across the spectrum – it is enabling new scientific discoveries and bringing about radical transformations in quantum computing, healthcare, navigation and climate change technology.
• OrganOx (Oxford) for creating the metra, a world-first device that can keep a human donor liver functioning outside the body for up to 24 hours prior to transplant.

Over the last 50 years, MacRobert Award winning innovations have changed the world, delivering enormous economic and societal benefit and contributing to the UK’s standing as the world’s eighth largest manufacturing economy.