Brose, which provides seat structures and window regulators to Jaguar Land Rover, Nissan and Toyota, has invested nearly £2 million over the last two years into the introduction of Automated Guided Vehicles (AGVs) that will speed up the movement of finished goods and eliminate any prospect of human error.

The factory in Coventry has fully embraced driverless vehicle technology, with AGVs expected to make more than 650,000 different journeys every year in seat production. 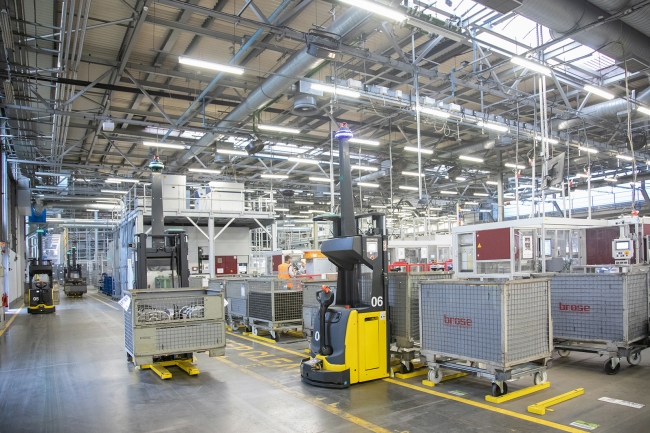 Travelling at one metre per second, the AGVs will cover 67,000 kilometres per year, which is the equivalent of travelling around the earth 1.5 times. Typically, they are used where high volumes of repetitive material movements are required and where little or no human decision making is needed.

Steve Wilkins, Managing Director of Brose UK said: “The automotive sector is extremely demanding and there is a continuous need to produce parts quicker and react to fluctuating patterns in demand – logistics is crucial to us being able to achieve this. Coventry was chosen as one of the pilot locations due to the compelling business case we put forward for helping us to win future contracts.”

AGVs use laser reflectors for navigation and are programmed by CAD-based software that routes available paths and indicates locations that allow vehicles to pick or deliver a load or empty stillage.

Using the Brose Transport Guidance System, the AGVs are able to communicate with each other to ensure materials are moved smoothly through the warehouse, whether they are being stored for future use or sent directly to shipping lanes.

At the same time, they can be programmed to work alongside human counterparts on the same production line, depending on where there is a need for capacity, making them extremely flexible.

Steve added: “AGVs have little downtime and operate at a fixed rate so it is easier to plan operational activity. In addition, they are computer controlled, which eliminates human errors in terms of damage to the facility, spillage to inventory and improved safety of pedestrians.”

The AGVs are the latest in a long line of strategic investments in logistics by Brose at its Coventry facilities, including a state-of-the-art paint plant, tugger trains and a bespoke Transport Guidance System.