Cepac, the country’s leading independent corrugated packaging producer, continues its programme of investment with a £2m expansion of its site at Rawcliffe Bridge in East Yorkshire. This follows the recent £1m investment in doubling the size of the company’s Doncaster site.

A new production and warehousing facility of approximately 45,000 sq ft is being constructed at Rawcliffe to enable better workflow and create more storage space, providing greatly increased capability and the platform for continued expansion. It will also allow the company to optimise the output from its new multi-point gluer (installed a little over a year ago), which itself represents an investment of £750k. 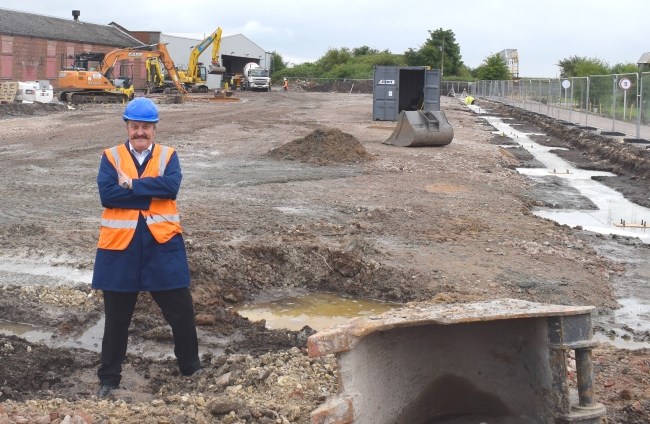 General Manager of the Rawcliffe Bridge factory, Richard Moore at the site of the latest investment / Picture: Cepac

Cepac purchased the Rawcliffe site in 2013 and has since more than doubled the turnover with targeted investments, and increased the workforce from 75 to 125. The site’s specialist products are currently experiencing increased interest from a wide range of sectors and in the automotive industry the site is a major supplier to Jaguar Land Rover.

The Rawcliffe site is a pioneer in developing new products such as the soft-lined Corsoft corrugate which is being used by Ideal Boilers. The Rawcliffe factory is also capable of producing particularly large-format pre-print boxes and customers, including Iceland Foods, are making use of this capability.

General Manager of the Rawcliffe Bridge factory, Richard Moore, said: “Cepac has invested in our site since the acquisition and this latest phase represents the most significant investment at the site for many years. The improvements really secure the long-term future of Rawcliffe and underpin its continued growth and our ability to service our customers, in addition to continuing to provide increased employment opportunities for our excellent team.

“The spirit in the plant has been significantly buoyed by this announcement. The investment is absolutely key to our future strategic objectives. Under Cepac’s ownership the plant has thrived and we are all very excited about the future and our plans for continued expansion.”

A significant part of the site’s heritage has been its involvement in the production of paper-based materials for almost 130 years and the site was originally developed for the manufacture of graphic papers. In the process of digging the foundations for the new buildings some notable artefacts from the factory’s history have been unearthed in the form of 16 granite mill stones.

Richard Moore added: “The stones are absolutely enormous and, we believe, weigh about four tonnes each. They’re roughly around five feet in diameter and two feet thick. We had no idea they were there. They had been buried in the rubble and then concreted over. We’ve preserved them and plan on making them into an architectural feature to reflect our heritage.”

It is believed that the mill stones were used for grinding wood pulp imported from Scandinavia and transported to the wharfage behind the site via Goole Harbour, a short distance from Rawcliffe.

Ground was broken on the site in early June with foundations now laid and steel work on the new buildings to follow.

Richard Moore concluded: “This investment will enable us to partner with many new customers and increase our service offering to our existing customer base. We are extremely excited about the future of our plant and meeting our strategic growth targets.”

Founded in 1999, Cepac is part of the international HSA Group. Cepac also has plants at Darlington, Doncaster and Rotherham, in addition to the Rawcliffe plant