Lord Prior of Brampton, Chair of NHS England opened the new 55,000 sq. ft headquarters on the outskirts of Cambridge which is now the centre of CMR Surgical’s operations; supporting growth across four continents and commercialising the Versius® surgical robotic system.

The headquarters will provide a base for CMR Surgical’s accelerated international expansion and deliver substantial manufacturing facilities in the UK to meet global commercial needs.

Martin Frost, CEO of CMR Surgical said: “Our new global headquarters are an important symbol of the scale of our mission – to enable millions of people to get the right type of surgery. I thank Lord Prior for opening our offices. I believe our aim to make surgical robotics accessible for all is well-aligned with the purpose of the NHS. As a company, we are on an exciting journey and I look forward to the introduction of Versius to health systems worldwide.”

Lord David Prior, Chair of NHS England added: “Robotics is going to play a growing role in surgery covering an increasing range of different procedures and specialities giving greater accuracy, quicker recovery times and better outcomes. It is fantastic that we now have such a major player in the UK, at Cambridge. They are a great example of British engineering excellence, inventiveness and entrepreneurial ambition.”

CMR Surgical has grown significantly in the five years since the company was founded, now employing over 300 people. Versius® is expected to be used in hospitals in the UK and continental Europe in the next 12 months, with wider international expansion shortly afterwards as the company completes significant regulatory milestones. 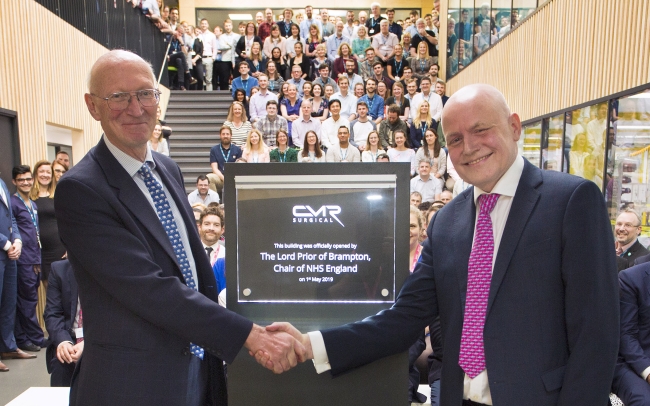 The new Cambridge site has now become home to the final manufacturing, assembly and testing of Versius / Picture: CMR Surgical