Cranswick has started the construction of its new c.£60m class-leading primary poultry facility in Eye, Suffolk.

Following Cranswick’s purchase of Crown Chicken, based in Weybread and Kenninghall, in 2016, Cranswick has spent the last two years developing the business and is now moving to the next phase of growth.

The new site is due to open in late 2019, when it will be operating the most efficient poultry processing facilities both in the UK and Europe, supplying leading UK retailers and other manufacturers with fresh poultry. 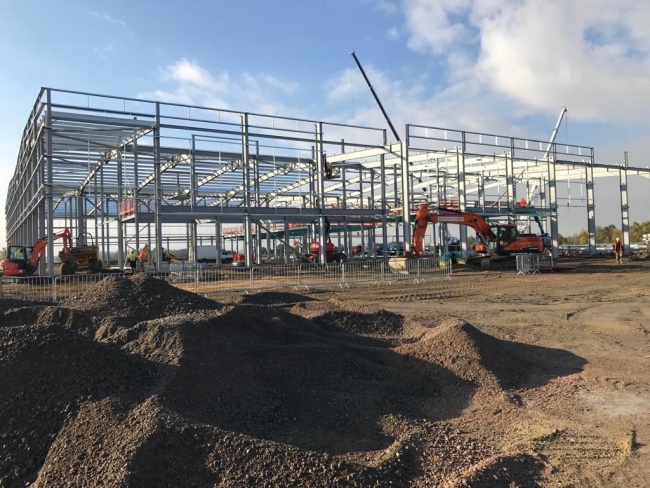 Cranswick has started the construction of its new c.£60m poultry facility in Suffolk / Picture: Cranswick

The site will employ over 700 people, with approx. 300 new jobs created in the region and the remaining staff transferred from Cranswick’s existing production facility in Weybread. Cranswick already operates three food processing sites and runs pig and chicken farming operations across Norfolk and Suffolk; employing over 2,000 people in the region.

The project is the largest single investment ever undertaken by Cranswick requiring c.£60m of investment. Additional investment is planned across the farming and feed-milling infrastructure, taking the total investment relating to the project to c.£70m.

David Park, Managing Director of Cranswick Poultry said: “The project at Eye is very exciting and will create one of the most advanced poultry sites in Europe. Since acquiring Crown Chicken in April 2016, we have been committed to ensuring work on the site is carried out by local companies. We are excited to welcome existing team members to the new site at Eye and look forward to creating around 300 new jobs in the region.”

The innovative project design and architecture has been managed by Trundley Design Services, based near Kings Lynn. In a bid to bring as much benefit to the local community as possible, Cranswick has awarded over £10m of the project costs to local contractors, including a £6m contract to JH Vaudrey & Son; the main civil contractor to complete the groundwork, who are based just two miles away from the site; a £1.5m contract to A C Bacon of Hingham, who will supply the steelworks for the site and JBC Roofing of Kings Lynn, who have been awarded their largest ever contract, worth £1.5m.

With the groundworks now complete, the external structure is expected to take shape over the next few months. The building work will continue until October 2019 and the site is expected to be operational by the end of the year.