Dances with robots: changing perceptions at the V&A

A powerful display featuring robots, human dancers, music and synchronised projected graphics in London this week is challenging people to question their attitudes to robots.

The “Slave/Master” project, designed by the Brooke Roberts Innovation Agency (BRIA) and on show at the V&A Museum this week, shows two pairs of robots dancing in perfect sync with human performers in a dramatic but finely choreographed routine, while back-lit with graphics that depict the robots’ “souls”. The installation wants to help change people’s perceptions of robots using art.

Beginning with slow, moody music, the human dancers and robots move together, the robots reacting to the dancers’ movements, the routine rising in tempo to a crescendo of motion and music, before the slower more subdued finale. 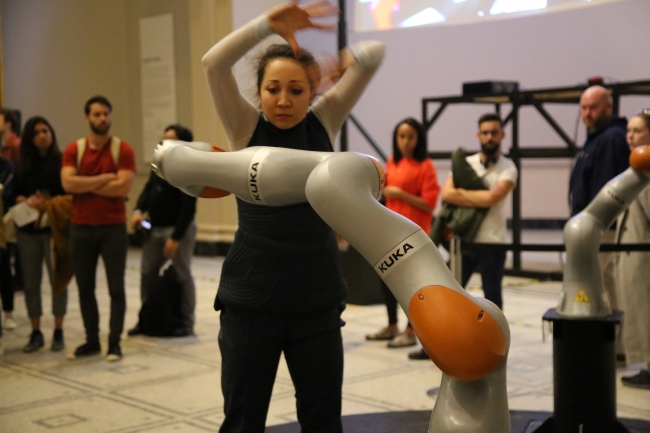 The ‘Slave/Master’ project was designed to challenge people to question their attitudes to robots / Picture: BRIA

While passing between the robots pairs and moving in sync, the dancers maintain a safe distance from the robots at all times, showing the public that the new generation of collaborative robots – also known as “cobots” – are designed to work alongside humans safely.

“We wanted to explore the borders around human/robot interaction and reverse the traditional “fear” of robots taught to us by cautionary science fiction tales,” said the installation’s creative director, Brooke Roberts. “Instead, we’ve created a physical dialogue and demonstrate the impact that humans can have on robots’ behaviour, with the larger aim of challenging people’s perception of the increasing prevalence of robot technology and making it feel more accessible and less daunting.

The project was supported by technology partners KUKA Robotics UK, Adelphi Automation and SCM Handing and used PowerMill software from Autodesk. The dancers and staff from BRIA were trained how to use PowerMill and programmed the basic choreography within 1.5 days.

“This is great to see, a more realistic and modern interpretation of how robots and humans will interact,” said Ian Walker, Director of Automotive at KUKA Robotics. “We are at the cusp of a big change in the use of collaborative robots in industry and in services. This display helps show people robots are now designed to augment, not challenge, human activities.” 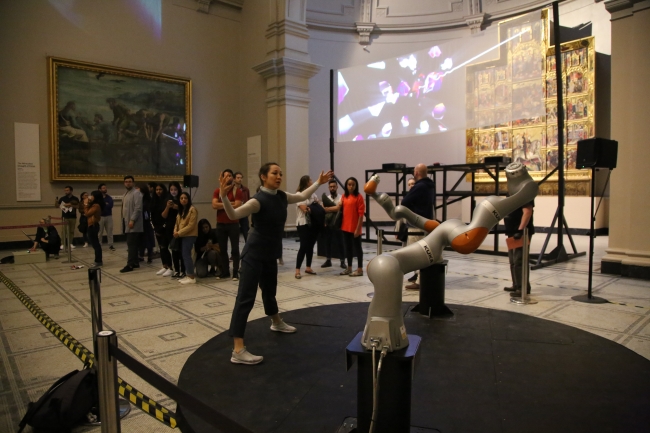 The performance also uses projected graphics as a window into the “souls” of the robots, with bespoke algorithms and projections provided by technical partner Holition. Using data from the movement and urgency of the robot performers, 3D shapes are formed. Overlaid with silhouettes, these shapes represent memories of past interactions with humans, portraying the robots’  “mood” to the audience.

“We showed the choreographers the PowerMill software that programmes the robot’s movements and they programmed the entire sequence in about a day, showing its intuitive software,” said Autodesk’s Chan Solanki. “We are delighted the project has turned out so well and would urge anyone to visit it.”

“Slave/Master” is free to attend at the V&A Museum until 24 September.