Dowty Propellers has opened a new state-of-the-art facility in Brockworth, Gloucestershire, which will provide a modern operation for the company’s development, manufacture and support of propeller systems with all-composite blades.

The Brockworth facility replaces Dowty Propellers’ original headquarters and blade manufacturing facility in Gloucester that was destroyed by fire in February 2015. Located just outside Gloucester at Brockworth’s Gloucester Business Park, the new 183,000 sq ft building brings together Dowty Propellers’ primary resources at one site: from the full production process for its propeller systems to the company’s administrative offices, design and engineering teams, as well as its Repair and Overhaul (DPRO) centre – the UK arm of Dowty Propellers’ global support network.

It will incorporate technologies for the production, control, repair and in-service support of the company’s propeller systems, which are used on turboprop and turboshaft engines powering regional airliners and military airlifters, along with amphibious aircraft and marine hovercraft. 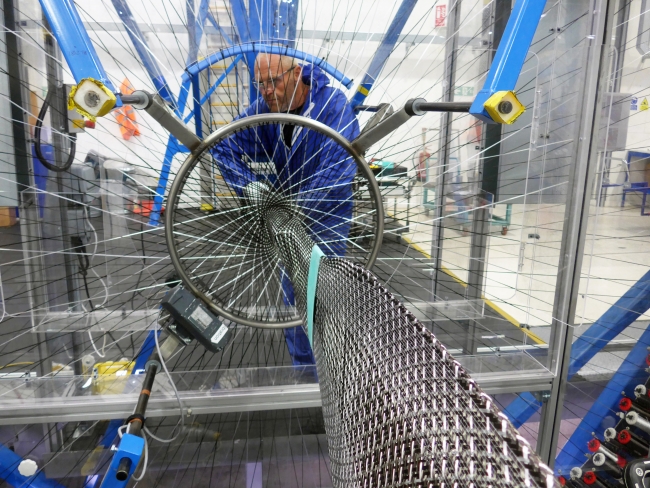 To enable the continuation of operations following the fire, the company purchased new production equipment and created an interim blade manufacturing facility in the Gloucestershire area at Mitcheldean. This equipment is now being transferred from Mitcheldean into the new building at Brockworth, which is to become fully operational in the first half of 2020.

Additionally, the UK DPRO centere – which previously had operated at a separate location in Gloucester – will now be integrated into the new Brockworth facility, providing additional synergy with the company’s design engineers, production specialists and support teams.

Oliver Towers, president of Dowty Propellers, said: “Today’s inauguration underscores Dowty Propellers’ firm commitment to continuing its leadership in creating, manufacturing and supporting the most sustainable, efficient and robust propeller systems. It also is an unequivocal testament to our employees, who met the challenge of literally rebuilding Dowty Propellers from the ground up in what is widely seen as one of the most remarkable recoveries in the aviation industry.” 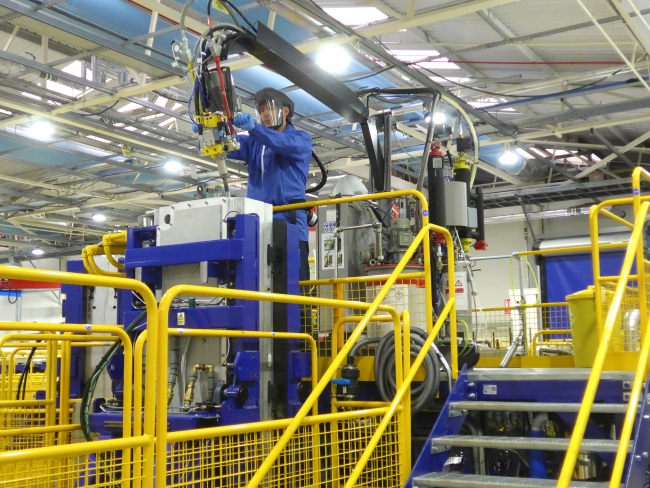 The production process for Dowty Propellers’ high-technology composite propeller blades includes the injection of a foam core, which provides structural rigidity for the blade while being lightweight / Picture: Dowty Propellers

As a business of GE Aviation, Dowty Propellers benefited from its parent company’s resources in the post-fire recovery efforts. Within hours of the February 2015 fire, core Dowty Propellers teams had been relocated a few kilometers away to GE Aviation offices in Bishops Cleeve, Cheltenham, where they were provided with telephones, computers and system connectivity. 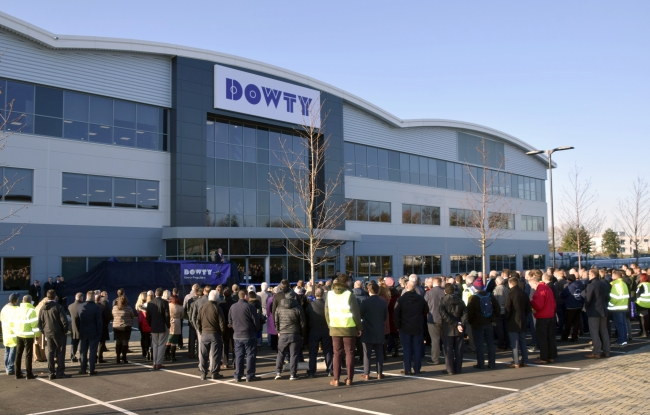 This enabled the preparation of a reset plan that focused on three elements: keeping the Dowty Propellers-equipped aircraft fleets flying with customers and operators; rapidly re-establishing the composite propeller blade production capability; and retaining the company’s ranks of skilled employees. The reset plan was successfully carried out as defined immediately after the fire, with Dowty Propellers meeting its milestones during the four years that followed – including the timing for today’s new facility inauguration ceremony.

Gary Elliott, chief executive officer of the Aerospace Technology Institute, which creates the technology strategy for UK aerospace, and funds research and development, said: “The new facility offers a unique opportunity to realise the benefits of the significant investments made in recent years in the new technologies and advanced manufacturing techniques that will support the development of more-efficient and lower-noise propellers.

“We are pleased to support the DigiProp programme and Dowty Propellers’ state-of-the-art research to find ways to increase the efficiency and reduce the noise footprint of what is already an inherently efficient propulsion system. Propellers have a great future as we need ever more efficient aircraft, including their application in hybrid and electric-powered solutions.”

Brad Mottier, GE Aviation’s vice president and general manager of the business and general aviation & integrated systems operation, concluded: “Dowty Propellers’ efforts over the past four years not only represent its commitment to the exciting future of propellers, but also its commitment to providing world-class products and solutions for its global customer base. With this state-of-the-art facility, Dowty Propellers is poised to continue its leadership in this industry with sustainable, smart technologies and a driven, dedicated workforce.”