Dynamo, the UK-based vehicle manufacturer, has launched the first 100% electric, zero-emission, ‘Hackney Carriage’ black cab, that has been officially approved by Transport for London (TfL).

Taking the highly successful Nissan e-NV200 Evalia MPV as a basis, each Dynamo Taxi is re-engineered into a wheelchair-accessible vehicle capable of carrying up to five passengers by Dynamo at its Coventry headquarters. To satisfy Transport for London approval, Dynamo has also reduced the Nissan’s turning circle to meet the TfL’s 25-foot turning circle requirements, allowing it to tackle the tightest of London’s streets. 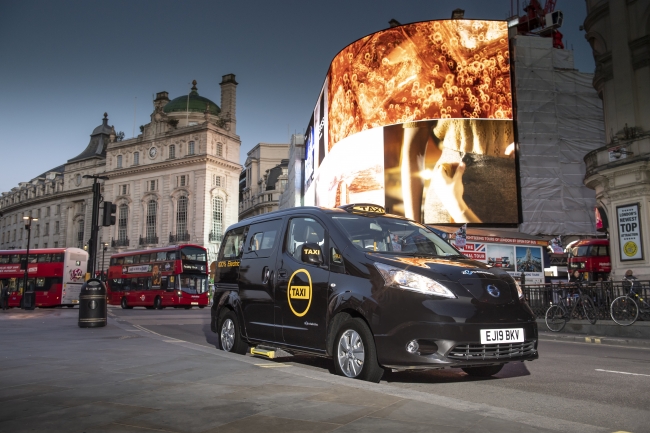 “The Dynamo Taxi is the UK’s first Transport for London-approved fully electric taxi and is designed with both drivers and passengers in mind. With a low starting price, and a reliable vehicle architecture in the Nissan e-NV200, we are offering a truly unique solution to the tens of thousands of taxi drivers in London and cities across the UK.”

The Dynamo Taxi is expected to accelerate the retirement of current diesel taxis from city streets across the UK, improving air quality. Taxis currently account for 16% of all vehicle nitrogen oxide (NOx) emissions in central London, according to TfL figures.

To curb emissions, Transport for London has introduced new, tougher, licencing requirements for new taxis, limiting their emissions to 50g/km CO2 and a mandatory zero emissions range of at least 30 miles. Any new taxi vehicle has to meet these emissions criteria to operate within London.

The average taxi driver in London covers a distance of 90 to 120 miles a day, spending roughly £25 in fuel a day. Using a home charger, it will cost Dynamo Taxi drivers £3-£6 in electricity to cover the same distance, saving drivers nearly £20 a day in running costs alone. The Dynamo Taxi has a range of up to 187 miles from a single charge (according to the WLTP test) – far above the average distance taxi drivers in London cover daily – and is compatible with 50kW CHAdeMO rapid charging.

Kalyana Sivagnanam, managing director for Nissan Motor (GB), added: “Nissan has been pioneering modern electric vehicles for nearly a decade now and we are keen to showcase how viable our EVs are and the role they can play in shaping the future of zero emission mobility.

“The e-NV200 launched in 2014, of which the Dynamo Taxi platform is based on, has proven its worth with over 25,000 vehicles sold in Europe, making it the top selling LCV electric vehicle in Europe to date. We are excited to see companies such as Dynamo taking our vehicles and developing them for different uses to address some of today’s air quality challenges.”

The Dynamo Taxi costs £55,495, and is eligible for £7,500 in government plug-in car grant funding bringing the price down to £47,995 for drivers, making it very competitive in the EV taxi market.