More than 40 young people have signed up to be among the first cohort of students at the Marches Centre of Manufacturing & Technology (MCMT) following the recent open day.

The £4m state-of-the-art training hub in Bridgnorth threw open its doors to give young people, parents and employers the opportunity to see how they can benefit from this ambitious venture that will provide ‘2020 learning opportunities by 2020’. 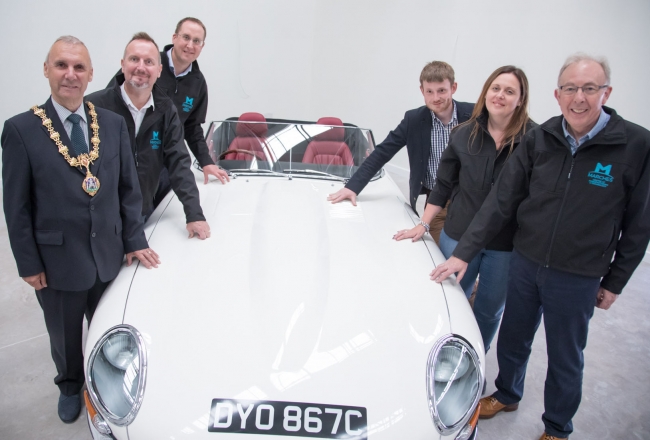 Ron Whittle, the Mayor of Bridgnorth, joined more than 500 visitors at the Stanmore Industrial Estate facility, which is being run by a consortium of Classic Motor Cars, Grainger & Worrall, In-Comm Training and Salop Design & Engineering.

He praised the four employers for joining forces in a bid to start solving the county’s critical skills gap and commented on the scale of the MCMT and the amount of new technology that will soon be installed.

“This was the first time we’d been able to showcase what we are doing in the nearly-finished building and the response was fantastic,” explained Matthew Snelson, Managing Director of the Marches Centre of Manufacturing & Technology.

“Over 500 visitors joined us during the 5 hours and, importantly, we had lots of school pupils keen to explore a possible career in engineering and manufacturing. Once they saw what we had planned, spoke to In-Comm about the training opportunities and saw the robotics/CNC machines we were putting in, 40 of them signed up on the spot.”

He continued: “I think we’ve captured the imagination with this venture, where a company-led approach is harnessing public sector funding to creating Apprenticeships and upskilling opportunities that will make a real difference to firms in the county.”

The Open Event was the first time people could look inside the vast 36,000 sq ft training hub, which used to be an old storage unit for Grainger & Worrall.

There was 11 employer stands present, all keen to be matched with young apprentices looking to start their first step on the engineering and manufacturing career ladder.

Matthew concluded: “The building should be handed over to us in a few weeks and then we’ll have the job of kitting it out with up to £2m of technology and machinery.

“We’re also still looking to recruit both employers and apprentices so there’s still time to be part of a ‘Shropshire first’.”

The Marches Centre of Manufacturing & Technology has received £1.9m of Government Growth Deal funding via the Marches LEP to bring the concept into reality, with £1.1m of private funding already pledged.

It will provide a high-tech environment for individuals to learn from engineering experts on the latest technology – all geared towards giving them opportunities to apply their new found skills on real life manufacturing situations.

There will also be an auditorium lecture theatre, bespoke learning environments, five vehicle ramps and a rolling road test facility.