Five young engineers who have made a major impact in their respective fields early in their careers each received a prestigious award at the Royal Academy of Engineering Awards Dinner on Thursday 29 June.

All five are winners of the RAEng Engineers Trust Young Engineer of the Year competition. Awarded by the Royal Academy of Engineering with support from the Worshipful Company of Engineers, five prizes of £3,000 are presented to early career engineers whose achievements are recognised as outstanding. Suranga Chandratillake FREng, General Partner of Balderton Capital, presented the awards.

The overall winner, Dr Ruth Misener from Imperial College, also received the Sir George Macfarlane Medal for excellence in the early stage of her career. 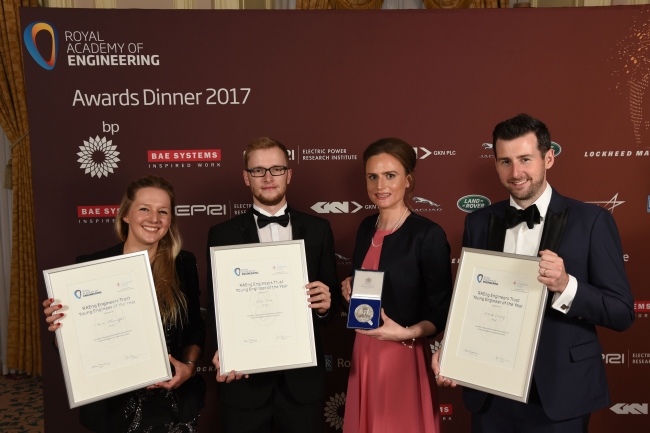 Winners of the ‘Young Engineer of the Year’ at the Royal Academy of Engineering Awards / Picture: RAEng

Dr Ruth Misener is currently a lecturer and Royal Academy of Engineering Research Fellow in the Department of Computing at Imperial College London. A chemical engineer by training, Ruth uses her computing-based position to develop innovative approaches to process systems engineering challenges using the latest computer science techniques. This has attracted attention from industrial partners, and two petrochemical companies and one informatics company now have strategic partnerships with Ruth’s research group.

Between 2012 and 2017, Ruth worked on her research fellowship. She optimized a red blood cell-producing bioreactor and developed the first physiologically-relevant mathematical model of Chronic Lymphocytic Leukemia connecting the affected tissues. Her ANTIGONE software is regarded as one of the best mixed-integer nonlinear optimisation codes currently available.

Ruth won the Journal of Global Optimization Best Paper of 2013 and the W. David Smith, Jr Graduate Student Paper Award 2014, as well as participating in editorial and peer review activities for various international journals. In 2016 she was a Finalist for Best Innovation in Teaching, the Imperial Student Academic Choice Award. Ruth also engages in community outreach, participating in Voice of the Future 2016, lecturing at the Engineering Summer School for Girls, and contributing to a Royal Academy of Engineering film on research activities. 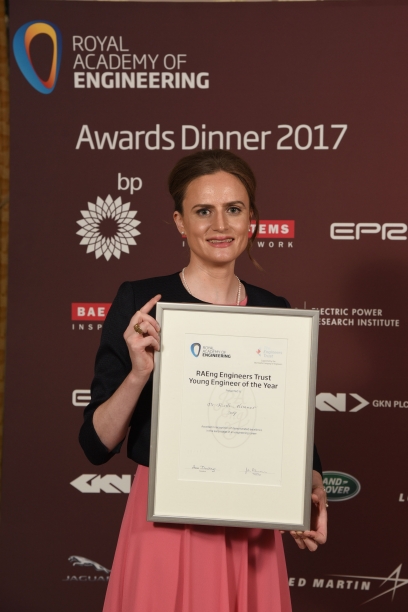 Frank is a chartered geotechnical engineer, who uses his academic and practical experience to create innovative solutions for seemingly impossible projects. He currently works at Arup, and is a PhD candidate at University College Dublin, analysing the time-dependent behaviour of retaining walls in clay, which will benefit practicing engineers.

At Arup, Frank is currently working on the design and construction of a basement beneath a Grade-II hotel in London. He and his colleagues found a way to excavate a five-storeybasement beneath the building, while ensuring that it remained fully operational, something that was initially considered impossible. He is also managing the geotechnical design for a large residential project in west London.

Frank shares his research and field expertise with the engineering community through presentations to industry bodies, publishing peer-reviewed papers and being a peer reviewer for the Institution of Civil Engineers. Together with the University of Cambridge, he has won funding from the Engineering and Physical Sciences Research Council for a PhD studentship and will be the industrial supervisor of the research.

Frank spends time mentoring work experience students and promoting engineering careers. He is part of Arup’s Early Careers Group, and hopes to use his strong relationships with universities to move the engineering industry forward. 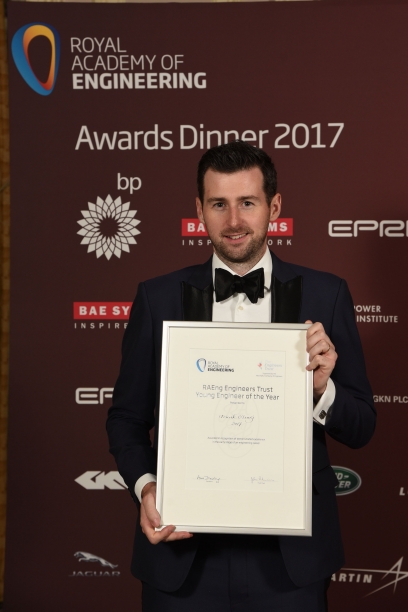 After achieving a first class degree in Materials Science at the University of Oxford, Anna Ploszajski became an EngD student at UCL, researching hydrogen storage materials. During her final year at Oxford, Anna and her industrial colleagues at Cella Energy, were awarded a patent for a polymer hydride composite they had developed. She has subsequently represented the company internationally, at conferences and in collaboration with colleagues at NASA.

Anna is working to change UCL’s engineering culture, and is supporting women and other researchers across the UK though her participation in an equality and diversity committee. She was the first woman in UCell, a team of UCL PhD students who promote engineering by providing green hydrogen energy to power stages at music festivals, and who give demonstrations at schools and family events.

She is an enthusiastic public communicator, and is engaged in various self-run projects to promote engineering. Anna designed and made a Ruben’s Tube, which visualises sound waves making fire, that she has demonstrated at the Bloomsbury Theatre, the Institute of Making, the Royal Institution and International Women in Engineering Day. She writes a monthly feature for Materials World magazine, engaging with readers from a range of backgrounds and produces a podcast about materials engineering called ‘rial talk.

Anna also promotes engineering and her own research through stand-up comedy. She is involved in Bright Club, and Engineering Showoff, and she was selected for the Talent Factory, a group of up and coming science communicators. This has led to many collaborations, including a short film about women in STEM and a panel show at the Edinburgh Fringe Festival. 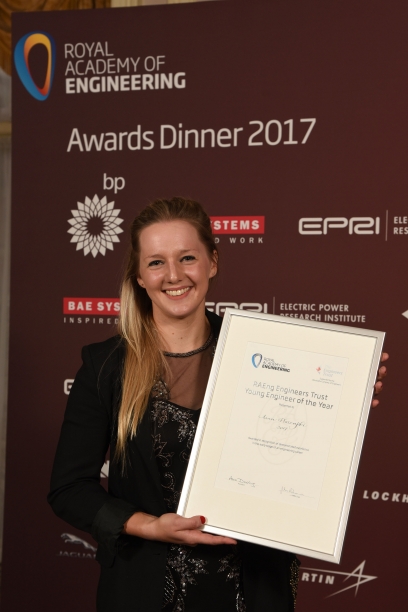 Chris Shaw graduated from the University of Bath in 2014, after studying Mechanical Engineering. He was awarded the David Embleton Innovation Bursary Award by the university for an outstanding Final Year Project with commercialisation potential. He used this bursary to start a company, B3D Technology, developing his final year project into a 3D joystick that makes drones more intuitive to fly. He also secured an InnovateUK grant to develop 3D magnetic sensing technology that resulted in a working prototype joystick flying a drone.

To fund his company, Chris also worked as a freelance design engineer on start-up projects. He led technical development for a project at the Watershed in Bristol, where he undertook all the electronics and firmware R&D for a prototype electronic game called Fabulous Beasts that won the Best Technology award at indie games festival Indicade in 2015.

Chris is now a founding member and Lead Engineer of a company called Sensible Object set up to manufacture the game, on-sale as Beasts of Balance, which uses Bluetooth, NFC and analogue technologies. Chris also represents the company as an engineer at public events including arts and games festivals. 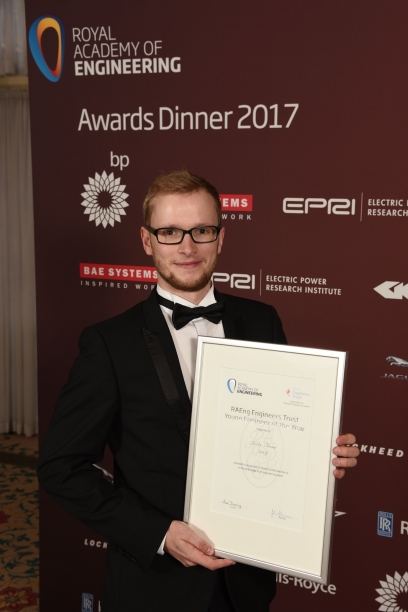 Dr Jenni Sidey is a lecturer at the University of Cambridge’s Department of Engineering. Following her PhD investigating low-emissions combustion, Jenni worked as the lead post-doctoral researcher on a European Commission project for a year. She received an industrial research sponsorship from the Rolls-Royce University Gas Turbine partnership.

Jenni is a member of the University of Cambridge Women in Engineering initiative, and a regular speaker at events aimed at promoting diversity in engineering, as well as being a role model for other young women in the engineering department.

She was recognised as the Institute of Engineering and Technology’s Young Woman Engineer of the Year, and in July 2017 was named as the latest recruit to join the Canadian Space Agency’s astronaut corps – one of only two successful recruits from almost 4,000 applicants.

Jenni co-founded the outreach group Robogals Cambridge, which is dedicated to introducing young girls in the Cambridgeshire region to STEM careers through robotics workshops and competitions. She is also involved in initiatives to raise awareness of gender equality issues, both in and beyond the Department of Engineering. 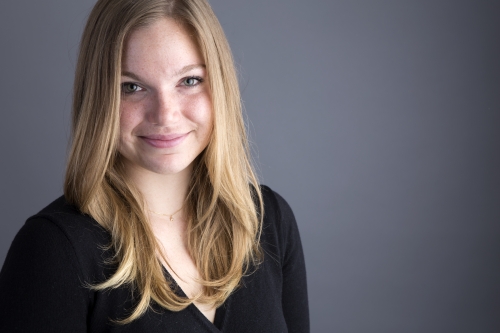