Gilkes specialises in the design and manufacture of hydro-electric turbines and cooling pumps for high horse-power diesel engines, with parts sourced worldwide. The company has acquired a Mazak INTEGREX e-1250V/8 vertical Multi-Tasking machine, with the intention of increasing capacity at its Kendal facility and also ultimately to re-shore the manufacture of vital components back to the UK.

Specifically, Gilkes currently sources fully-machined turbine runners from an Eastern European supplier. The new Mazak machine will enable the company to bring 40 per cent of this machining work back to its facility in Kendal. 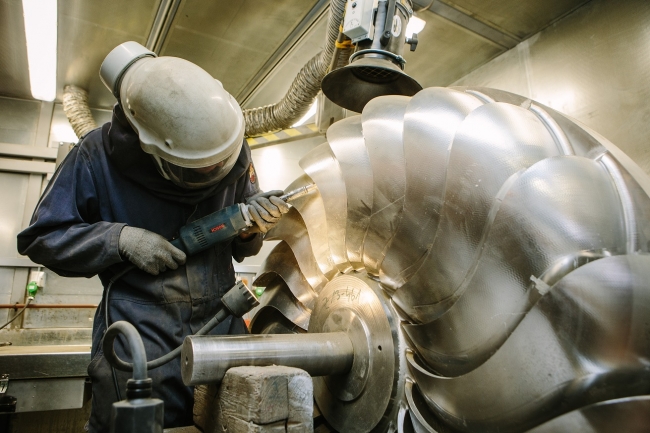 The INTEGREX e-1250V/8 is one of the largest machines in the Mazak range, designed for the 5-axis machining of complex large workpieces. The Multi-Tasking machine is capable of performing a variety of tasks that would normally be completed by multiple machines, including milling, turning, boring and drilling operations. In addition, Mazak will be supplying a complete tool management system to reduce manual input and set-up times and a new 5-axis CADCAM system.

Rebecca Sandham, Head of Operations at Gilkes, said: “Our current machine tools in Kendal are great workhorses, but we have gone about as far as we can go with them. With the Mazak we will be able to significantly increase our productivity levels which will enable us to continue be highly competitive in our global markets.”

She added: “The INTEGREX acquisition forms part of a long-term plan to upgrade our manufacturing capabilities, from 3- and 4-axis machining technology to state-of-the-art 5-axis capability which will increase our speed of manufacture, our overall productivity, and the quality of our finished parts. Ultimately, we want this investment to be seen as proof of our commitment to UK manufacturing operations and our responsibility to provide jobs for the local area.”

Alan Mucklow, Managing Director UK and Ireland Sales and Service Division at Yamazaki Mazak, added: “This investment is another great example of a British manufacturer committing to the UK and bringing back vital work and jobs. We are delighted to be working with a company that has a long-term strategic plan to overhaul its manufacturing operations, which will ultimately ensure that it safeguards its hard-won competitive position. The INTEGREX is one of our flagship machines, capable of what we call DONE-IN-ONE manufacturing. This means multiple machining operations can be completed on a single machine and a single set-up, ultimately delivering much greater productivity.”