I understand
Home•Gripple celebrates the launch of...

Gripple celebrates the launch of its quirky ‘Industrial Cathedral’

World-leading manufacturer of the iconic wire fastener, Gripple has celebrated the transformation of its Sheffield factory in true unconventional Gripple style in which the employee-owned company has invested £2m.

Fifteen more jobs have been created, with more expected this year. Production of a wide range of the company’s products has increased by more than 10 per cent using 35 high-tech cellular manufacturing machines capable of turning out 55 million Gripple wire fasteners annually to be sold across Europe, United States and Australia alone.

Providing 7,000 sq.ft more production space than the original building, the reborn building allows Gripple to cope with its current growth in the UK market particularly and dubbed by the company as the ‘industrial cathedral’ because of its ‘stained glass’ colour windows. 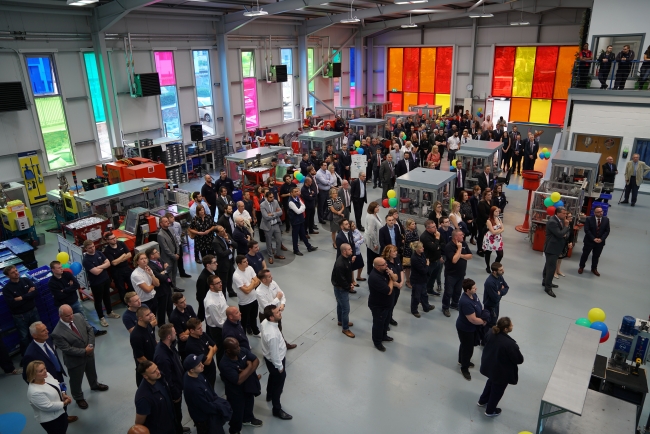 Designed to establish a pleasant workplace, the new building is also one of the ‘greenest’ buildings with £350,000 spent on 400 solar panels to heat water drawn from the river Don, a green wall of plants and a fish tank which is home to some sizeable koi.

The gardens surrounding the extended building, with its curves and walls set at an eight degree angle to avoid conventional straight lines, were created and are now tended by homeless people from the charity, Emmaus who were paid by the company.

After declaring the ‘Cathedral’ officially open and taking a tour around the exceptional building the Master Cutler said: “I have seen Gripple develop over the last 20 years and I am in awe of the team who have grown the company through product development and innovation. The new building is wonderful, unique and I am sure a great place to work.”

Gripple still has its head office in the Old West Gun Works on Savile Street East in Sheffield and one of its sister companies, Loadhog is on Hawke Street, also in Attercliffe.