An aerospace business in Broughton, which was as set up in the aftermath of the closure of Marshall Aviation Services, is celebrating after winning a new contract with a leading company.

Aerocare Aviation Services have been appointed UK dealer and preferred installer in the UK and parts of Northern Europe for Bendix King’s new state of the art glass cockpit, which is a further boost for the company established in 2017.

The core business for Aerocare is the maintenance, repair, overhaul, modification and refurbishment of business aircraft.  They offer a complete package including avionics and paint spraying, while interior refurbishments are carried out to very high standards for the luxury end of the business. 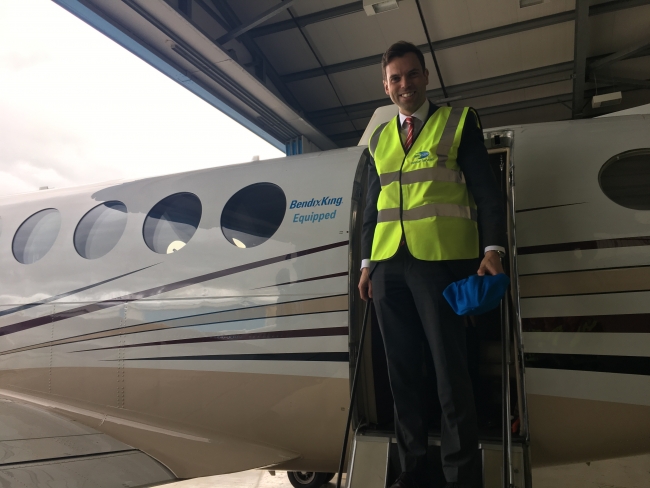 The company was spearheaded by the former General Manager at Marshall’s, initially employing 28 former workers, many of whom were assisted by the Welsh Government’s ReAct programme.  They went on to employ a total of 40 former Marshall employees and now the company has grown to 60 staff with a turnover of £7m.

As well as assistance through the ReAct programme Aerocare has also benefited from the Flexible Skills programme, Business Rates Relief scheme and has accompanied the Welsh Government as stand sharer at a number of key aerospace events.

Welsh Government Minister for Economy, Ken Skates said: “Aerocare are very much a phoenix company.  They have risen from the disappointment of the closure of Marshall, retained some of the skilled workforce with Welsh Government assistance, and are a real success story.

“Brexit is a major challenge for us all and it is good to see that Aerocare have won the confidence of Bendix King as their UK dealer and preferred UK installer with potential work in Northern Europe, despite these challenges.

“The aerospace industry is of vital importance to this area with a variety of businesses choosing to base themselves here bringing skilled jobs with them.

“The Welsh Government will continue to do all it can to support the industry as we face the challenges ahead.  Our commitment to the industry can be seen through our £20m investment in the Advanced Manufacturing and Research Centre nearby and our backing for business through the Business Resilience Fund.

“I’d like to congratulate Aerocare for their latest good news, and hope they will continue to thrive.”