HMS Prince of Wales, the second of two aircraft carriers designed and constructed for the Royal Navy, has sailed into its home port of Portsmouth Naval Base for the first time.

Hundreds of people, including industry employees and Royal Navy personnel, gathered along the Portsmouth shoreline to welcome in the ship, following the successful completion of its first stage of sea trials, nearly two weeks ahead of schedule.

Designed to test the carrier’s capability, the sea trials programme included the landing of a Merlin Mk2 helicopter and a test of all 158 essential systems on the ship which includes power and propulsion, radars, communications and essential hotel and platform services.

The ship’s arrival represents the culmination of 16 years of work by the Aircraft Carrier Alliance (ACA) – a unique alliancing relationship between BAE Systems, Babcock, Thales, and the UK Ministry of Defence – working to deliver the two Queen Elizabeth Class aircraft carriers. More than 10,000 people across the UK have been involved in the QE Class programme, including 1,000 apprentices, 250 graduates and six British shipbuilding yards. 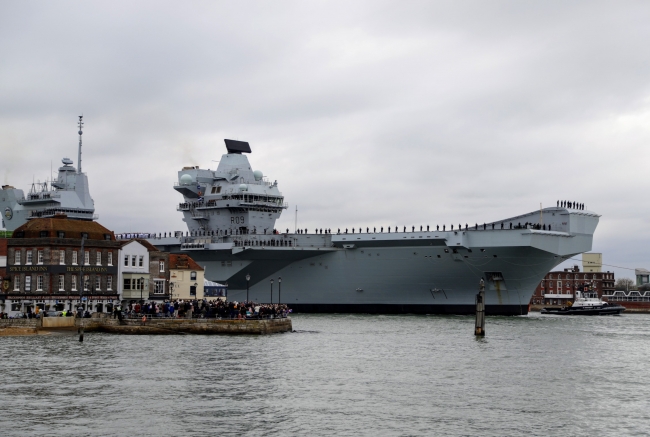 At its peak, more than 10,000 people worked on the Queen Elizabeth Class programme including 1,000 apprentices and 250 graduates / Picture: BAE Systems

A total of £1.65bn was spent with 700 companies in the ACA supply chain, of which 90% are in the UK. Each of the aircraft carriers is made up of 17 million parts. Each ship has 17 decks, 3,013 compartments and two propellers each weighing 33 tonnes.

Sir Simon Lister, managing director, Aircraft Carrier Alliance, said: “Today is an important day for our employees and the Royal Navy. Delivering next generation naval capability of this complexity is not only a proud moment for our employees but also showcases the industrial capability within the UK. This programme has brought together the best of British imagination, ingenuity and invention and I am extremely proud of our teams who have shown relentless drive, energy and a continued focus on ensuring we deliver the very best for the Royal Navy.”

More than £100m has been spent updating and enhancing the facilities at Her Majesty’s Naval Base, Portsmouth, including an upgrade to the Princess Royal Jetty which will be home to both aircraft carriers. A new combined heat and power facility has also been established to deliver power to the carriers, increase energy resilience and reduce the carbon footprint of the naval base. Made up of three natural gas generators, at full load, the facility can produce enough energy to power 28,000 homes.

The Queen Elizabeth Class aircraft carriers are the largest, most capable and powerful surface warships ever constructed in the UK, each providing our armed forces with a four acre military operating base.

Once fully operational, the ships will provide the forward deployed base for the UK’s F-35B aircraft, delivering an uncompromising carrier strike capability to the UK’s armed forces anywhere in the world.