Ifor Williams Trailers has officially opened its new £5 million factory in Sandycroft, Flintshire, where 60 jobs have been created. The iconic firm also celebrated its 60th anniversary in style by launching two new horseboxes as part of a triple celebration.

The guest of honour at the celebration was Ken Skates AM, the Welsh Government’s Cabinet Secretary for the Economy and Transport.

He was joined by a host of other VIPs and around 300 distributors from the firm’s worldwide sales network, with some travelling from as far afield as Australia and New Zealand. 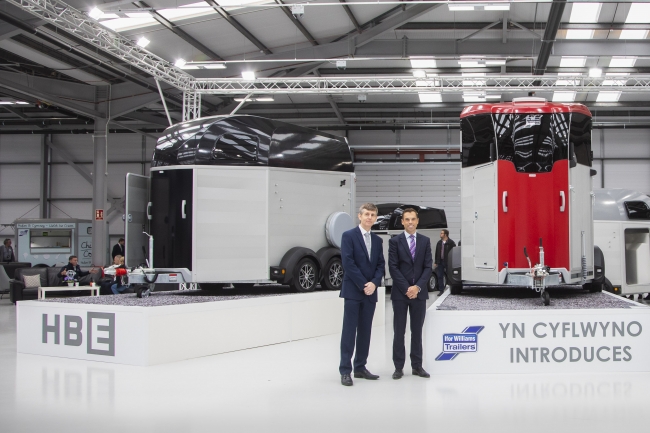 As well as the new factory in Sandycroft, the company has other manufacturing sites in Cynwyd, Corwen and on Deeside Industrial Estate and employs more than 500 people.

Mr Skates said: “Ifor Williams Trailers is a real success story. Sixty years after it was first established, the company continues to go from strength to strength and is an iconic brand across the world. It is also a regionally important business, employing hundreds of local people and providing a boost to our economy.

“It’s great news the company is developing new products and expanding its footprint in North Wales, and I’m delighted to officially open the new £5 million facility in Sandycroft.

“I look forward to seeing Ifor Williams Trailers continue to thrive over the coming years.”

Managing Director John Williams added: “This is a hugely significant and important day for Ifor Williams Trailers and we were delighted to welcome so many people from far and near to share our good news.

“We have three very good reasons to celebrate today, the 60th anniversary of the company, the official opening of our new factory in Sandycroft and the launch of the two new horseboxes.

“These products are the result of a great deal of hard work and innovation from our talented team and I am delighted they have received such a positive response from our distributors who can’t wait to start selling them.”

The sleek lines of the flagship HBX trailer have taken their inspiration from automotive industry with a nod to the sophisticated ruggedness of the Range Rover and its “floating roof”.

The other innovation is that the body of the HBX is constructed from aluminium, making it lightweight and easy to tow.

The second new trailer is the HBE which has been designed for the more cost conscious consumer with a distinctive European look and feel.

The two horseboxes are being added to the overall range which also includes the market-leading HB trailers and the Eventa which also has living accommodation.