JCB is celebrating a major milestone in its long record of innovative machine design – the 40th anniversary of the Loadall telescopic handler.

First launched in October 1977, the machine mechanised lifting and loading tasks on building sites more usually carried out by a small team of men. The potential for the Loadall in agriculture was also quickly harnessed and it went on to revolutionise materials handling tasks on farms, stacking bales, loading muck and shovelling grain, replacing rudimentary tractor mounted hydraulic loaders.
JCB has sold more than 220,000 Loadalls to date, generating more than £7 billion in sales – £4.5 billion of which has been from exports.

Today, daily output of JCB telehandlers at the World HQ in Staffordshire is currently at its highest level since the launch, with the number of machines built expected to increase by 25% by the end of the year compared to 2016. Such is the success of the product that one Loadall rolls off JCB’s Rocester production line every six minutes. The business making the machines today employs more than 1,200 people. 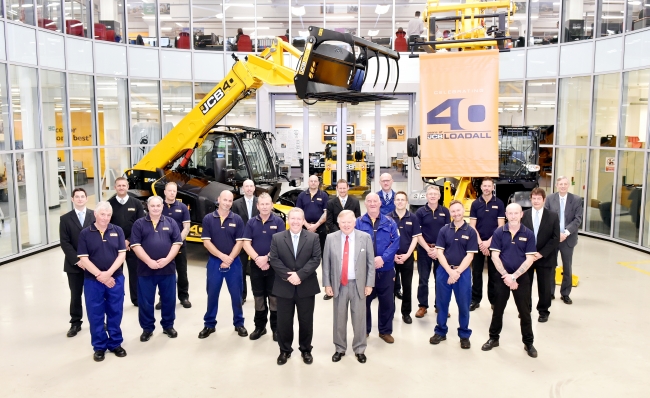 JCB Chairman Lord Bamford said: “When we launched the Loadall in 1977, we sold just 64 machines that year but we were very confident that the telescopic handler would grow in popularity simply because it made jobs so much easier on construction sites and on farms.

“The concept soon took off and the faith we put in the telescopic handler four decades ago has been repaid. It’s wonderful to celebrate 40 years of success of the Loadall with production hitting historic levels.

“I’d like to congratulate everyone around the world who has contributed to this success over the past 40 years. We must now look forward to the next 40 years and build on what has been achieved so far.”

Eddie Finney, 59, of Rocester, is a Team Leader in Loadall. He said: “I started my JCB career in 1976 in the machine shop but the following year I transferred and started working on the Loadall assembly line. At the time there were only four Loadalls coming off the line every day. I can’t believe the volume we have now achieved 40 years later.”

Kevin Holley, 60, of Uttoxeter, works in the Loadall Fabrication Shop on a laser machine. He said: “I joined JCB in 1978, working on a gas cutter for several types of machine. I then became a gas profile cutter for the Loadall division. At that time, with only four a day coming off the line, Loadall was thought to be the poor relation because it wasn’t as busy as backhoe. But I could see the potential straight away. It did amazing things and nobody else had anything like it.”

Keith Weston, 61, of Marston Montgomery, near Rocester, has worked in Maintenance at JCB since 1973. He said: “I have been on general manufacturing maintenance for most of my career but I was responsible for shot blasting and painting on the Loadall assembly line in the 1980s. In the early days I never realised Loadall would reach the volume of sales that it has. I have been proud to work on it.”

It took almost 30 years for JCB to sell the first 100,000 Loadalls but it took less than 10 years for the next 100,000 to be sold – testament to the growing importance of the product and JCB’s strength in this sector. JCB is World Number One for telescopic handlers with more than one in every three sold being a JCB. 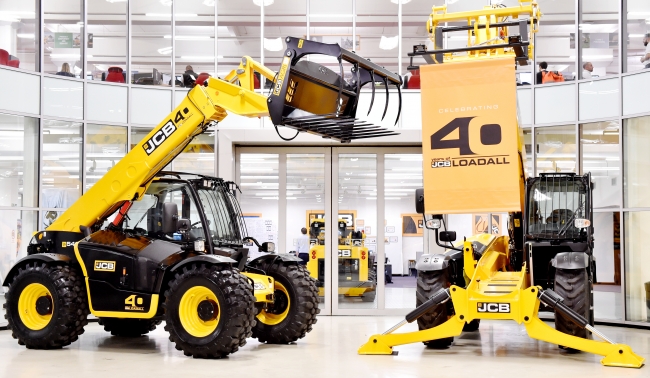 • There are 34 base models and over 1,000 individual configurations.
• Welding during Loadall manufacture consumes more than 14.5 million metres of wire per year.
• Each Loadall takes around 35 stages to produce and 8 hours to assemble.
• Loadall manufacture consumes more than 35,000 tonnes of steel a year.
• A recent £1 million investment brought new precision laser and plasma cutting equipment.
• A 650-tonne steel press forms the telescopic boom box sections.
• On average, it takes 45 minutes to make two sides of the heavy-duty chassis.
• Robots handle 70% of chassis welds – but skilled operators tackle hard to access welds.
• Preparing and painting booms, chassis and stabilisers (on construction models) takes two hours.
• The painting facility uses 73,000 litres of primer and 50,000 litres of gloss paint per year
• Every Loadall spends 13 minutes at full speed in a roller test booth to calibrate the driveline.
• Every Loadall must hold a test weight with the boom fully raised and extended for 10 minutes.