Komatsu UK has celebrated three successful decades of manufacturing in the North East of England, since it was officially opened by His Royal Highness The Prince of Wales in 1987.

One of the region’s most recognisable brands, Komatsu UK has been designing, developing and making excavators at its Birtley plant, just south of Gateshead, for 30 years. 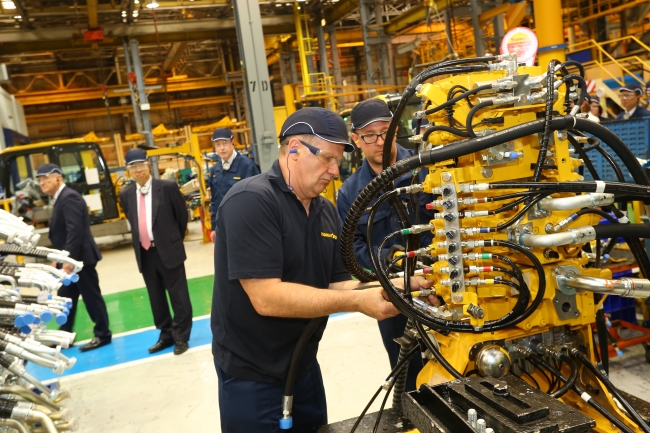 Komatsu UK managing director, Peter Howe, who has been with the firm for 24 years, said: “At Komatsu UK, we are a family – we all celebrate successes, we pull together during tough times, and we work as a formidable team to continue to drive innovation and productivity at this brilliant plant.

“To celebrate our 30th anniversary with our workforce and Komatsu Group CEO, Tetsuji Ohashi, who actually spent seven years working here when Komatsu UK was first established, is a truly proud and memorable moment.”

The firm has enjoyed an incredible year so far in 2017, launching four new excavators from its Birtley base, including the award-winning PC390HRD-11, created and perfected by Komatsu UK employees.

Ohashi-san said: “I have nothing but fond memories of my time at Birtley and learned so much during my time years here…and it is fantastic to see so many old friends and colleagues here on this momentous day.

“Komatsu UK arrived at a time when North East industry was changing dramatically. Not only did I work at Komatsu UK, but back in 1984, before the site was acquired, I was one of team members seeking a suitable location for the plant. I am not exaggerating when I say the whole region opened its arms to welcome us and we have felt that this is my second home ever since. In particular, I thank Gateshead Council, which supported us when the plant was established, and continued to do so ever since. I am also very pleased that the strong ties between Gateshead and Komatsu City still remain.

“I would like to congratulate everyone who has played a role in making this factory such a success over the last 30 years, from Peter at the helm to the newest apprentice. Komatsu is built on unity, innovation and hard work, all assets embodied perfectly here at Komatsu UK.” 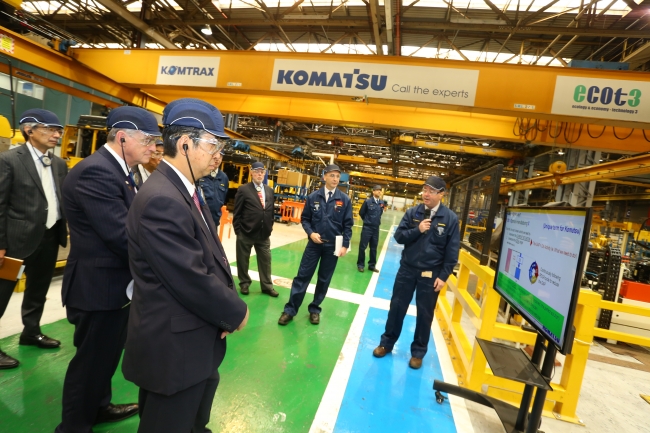 Komatsu UK is celebrating 30 years of manufacturing in the North East where they produce a range of excavators / Picture: Komatsu UK

One of the employees welcoming guests to the event was HR officer Jackie Lowe one of 30 people to have been at Komatsu UK since it first opened.

“I have spent practically my entire working life at Komatsu and what an incredible time I’ve had”, said Jackie.

“To have the opportunity to stand in front of all our guests, my colleagues and friends today and talk about my time and experiences at Komatsu UK was such a proud moment. I’ve experienced the best of times and some testing times, but wouldn’t change any of it.”

Komatsu has delivered high-quality excavators since 1987, when it helped redefine modern manufacturing in the North East, establishing a range of Japanese practices and ways of working unheard of in most UK plants.

Komatsu was at the forefront of the creation of a whole new industry in the North East that centered around automotive and construction equipment manufacturing.

Thirty years on, the firm employs around 400 people and remains at the forefront of manufacturing excellence. Testament to the company’s reputation as an excellent employer, 12 percent of the company’s current employees are celebrating their 30th year of service with the company in 2017.

• Komatsu UK has made over 65,000 machines, mainly to domestic and European markets
• It has produced 75 different models in that time, launching four this year
• There are 47 people who started in 1987 who are celebrating their 30thyear with KUK in 2017
• The plant currently employs 407 people
• Over 50 current Komatsu UK employees started their career at the Birtley plant as apprentices
• Komatsu UK is continuing to grow, and is currently recruiting 40 new employees. 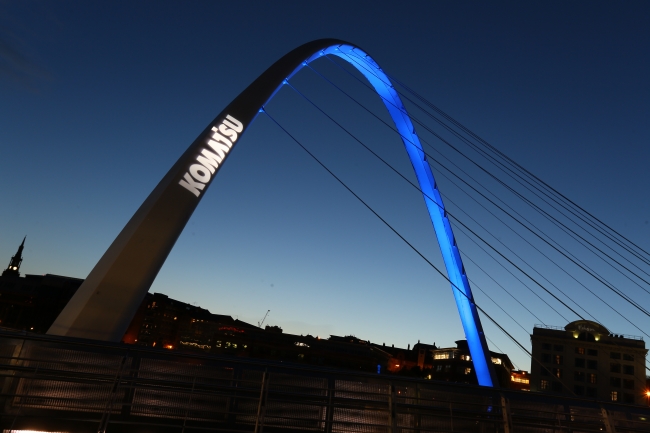 To recognise the three-decade achievement and close local ties, the Gateshead Millennium Bridge was lit up in Komatsu colours and logo / Komatsu UK