It seems that Brexit and global trade uncertainty have really started to bite UK Industry, as new orders domestically and international new business fell throughout October. The latest IHS Markit Purchasing Managers Index (PMI) was conducted from 12th – 26th October, just before the UK Chancellor announced a positive but Brexit deal–dependent Budget, and came in at 51.1, showing a decline in new orders and employment for the first time since the Brexit vote in July 2016.

However, despite October’s dip, almost half of UK manufacturers surveyed were optimistic for the next 12 months, citing new product development, increasing capacity and new opportunities for exports in the pipeline. 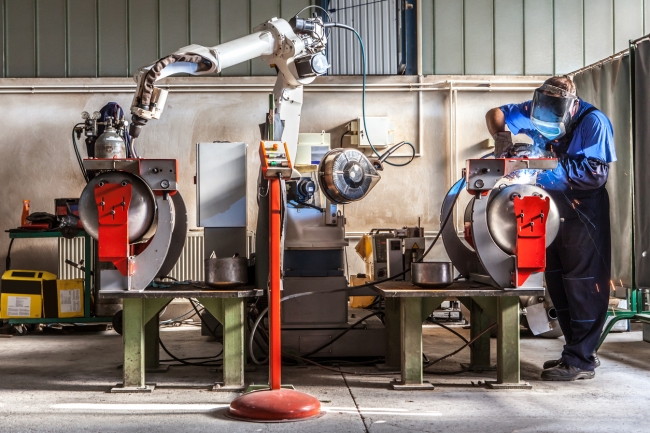 Despite October’s PMI dip, almost half of manufacturers surveyed were optimistic for the forthcoming 12 months, citing new product development, increasing capacity and new opportunities for exports in the pipeline / Picture: Getty/iStock

David Johnson, founding director of currency specialist, Halo Financial, said: “There seems to be a consensus that there will, at some point, be an end to the uncertainty. Companies have been getting on with business and planning ahead as much as they can, but there is only so much that can be done with so much global uncertainty about the future of our trading relationships.”

The consumer goods sector was the hardest hit, while investment and intermediate goods both grew a little. Overseas demand slowed, for the second time in the last quarter, as trade concerns globally take their toll. This had knock on effects on employment in the industry, which has been buoyant for a significant period to date.

“Another positive note is that input costs and output pricing inflation, while still high, have eased, which is another area that has been piling the pressure on to the sector,” continued Johnson, adding that, “We handle the foreign exchange needs of companies from a very broad spectrum of sectors and our experience is that companies across the UK are taking steps to prepare their businesses and create contingency plans. The outlook is still one of cautious optimism.”

“The effects of the deal or no deal uncertainty are strong, but there is certainly hope that they will ease once some clarity emerges. In the meantime, manufacturers need to do all they can to protect existing trading relationships, forge ahead with new ones and protect their international payments to maximise profitability.”

Dorrien Peters, partner at law firm, Irwin Mitchell, added: “The manufacturing sector has been incredibly resilient over the last few years, but with negotiations on Brexit now at a crucial phase, the levels of uncertainty detected by this survey, are not surprising.

“Manufacturers are of course not blind to what is going on and many have been planning for different scenarios once we finally leave the EU.  This hard work will no doubt pay off and I look forward to seeing an uplift in positivity from the sector once the picture on trade becomes clearer.”

Richard Powell, partner and manufacturing specialist at accountants and business advisors, MHA MacIntyre Hudson, concluded: “The PMI index showed a worrying fall to 51.1 in October 2018, its lowest level since the referendum result was announced in 2016.

This continues a steady trend of falling confidence over the last 12 months as uncertainty and misgivings about the UK’s exit from the EU grow.

Whilst there may be some bounce back from the positive announcements for industry in Monday’s Budget, this underlines the need to a deal to be concluded with Brussels as soon as possible to give UK manufacturers the clarity they need to plan for a post-Brexit world.”