The cutting-edge facility houses almost 700 highly-skilled design, engineering and manufacturing employees and is being used for the production of inert missile equipment and systems. An opening ceremony marked the completion of five years of development and £50 million of investment by MBDA.

The new site will significantly improve MBDA’s design, test and production capabilities – securing the UK’s and the company’s world-leading status in complex weapons technologies, as well as leading manufacturing capabilities in the North West for the next 25 years and beyond. 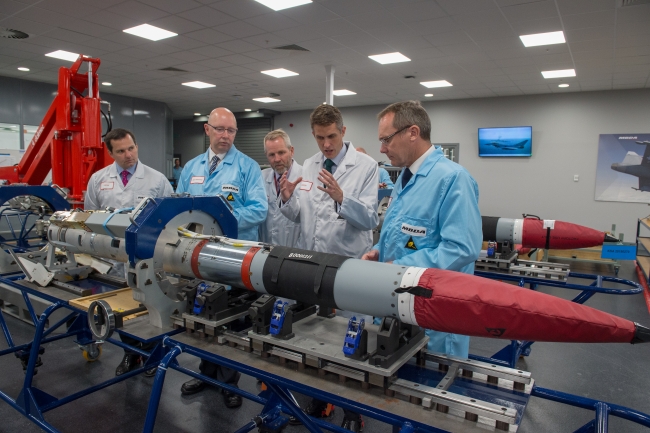 The Secretary of State for Defence, The Rt Hon Gavin Williamson CBE MP, being shown a Meteor missile by MBDA staff at their Bolton-based factory / Picture: MOD © Crown Copyright

Mr Williamson toured the production floor at Bolton and visited some of MBDA’s innovative and industry-leading centres of excellence. The new Bolton site is where a number of key missiles are being produced for the UK Armed Forces, delivering operational sovereignty and freedom of action to the UK.

These systems include Brimstone, ASRAAM, CAMM (Sea Ceptor and Land Ceptor), SPEAR, and Meteor which has its final assembly for all six European partner nations carried out at MBDA Bolton. The site will also play a key role in exports, underpinning the UK Government’s Prosperity Agenda.

During his visit, the Defence Secretary participated in the re-signing of the Armed Forces Covenant by MBDA, an important commitment by the company in support of what our Armed Forces do for the country. The visit concluded with the Secretary of State for Defence meeting employees who spoke about the wide range of activities undertaken at the site and how proud they are to play a strategically important role in UK Defence.

MBDA has invested £50m at the new facility in Bolton that employs almost 700 people / Picture: MBDA

Defence Secretary Gavin Williamson said: “This £50m factory supports 700 jobs in Bolton, showing how central strong British defence industry is to our national prosperity. MBDA’s investment has created more than 100 new jobs, and this has been supported by a £400m contract from the Government helping to create a further 100 roles within the company. You can’t have prosperity without security. MBDA in Bolton is keeping Britain safe while creating highly-skilled jobs and opportunities, demonstrating our commitment to the people of Bolton and the North West.”

Chris Allam, Managing Director of MBDA UK, added “I am delighted that the Secretary of State for Defence has today opened our brand new facility in Bolton. This new site builds on 80 years of illustrious company history down the road at Lostock and prepares us for the challenges of the future. The significant investment placed by MBDA into Bolton is testament to our commitment to our people, to the area, and to delivering on our order book for our customers.”