HRH the Duke of Kent has formally opened a new factory extension for Naylor Industries.

The family-owned company has installed a high-tech production line to manufacture large diameter plastic drainage pipes for its customers in the infrastructure, agriculture and utilities markets. 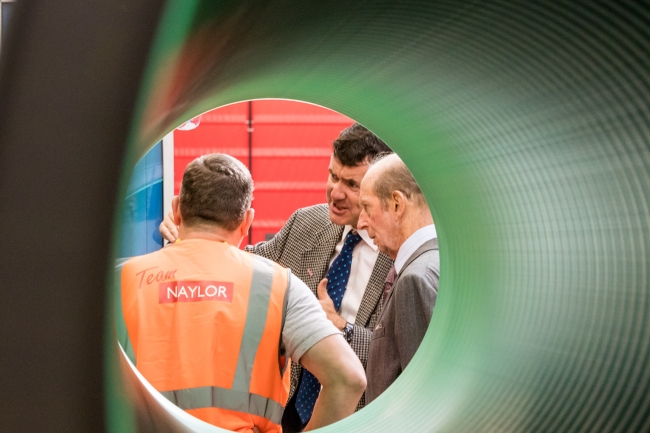 The previous major development took place in 2008, when the company completed a £4m investment in Cawthorne production facilities to manufacture 600mm diameter pipe, helping the company to accelerate out of the last recession.

The new project will manufacture double-walled pipes which are larger still – 750mm, 900mm and 1050mm diameter.

While the main plant was purchased from its German machinery supplier, around a dozen local suppliers were engaged in the factory extension project and enabling works. The project creates 20 new jobs on the Cawthorne site, including a number of highly skilled engineering roles and a team of Naylor employees was sent to Germany for training with the new equipment.

Founded in 1890, Naylor originally manufactured clay brick and pipes but expanded into plastic in 2000. Edward Naylor took over as chief executive in 1993 when Naylor was loss-making and had sales of £12m.

Naylor’s turnover broke through the £50m barrier for the first time this year. Naylor today employs 400 people at six sites across the UK. It also has a successful consumer business, Yorkshire Flowerpots, which are guaranteed frost-proof.

Every year, the Naylor group manufactures enough pipe to stretch around the world, twice. The new investment dramatically increases the capacity of the company’s Cawthorne site, which already manufactures up to 50 miles of pipe per day. 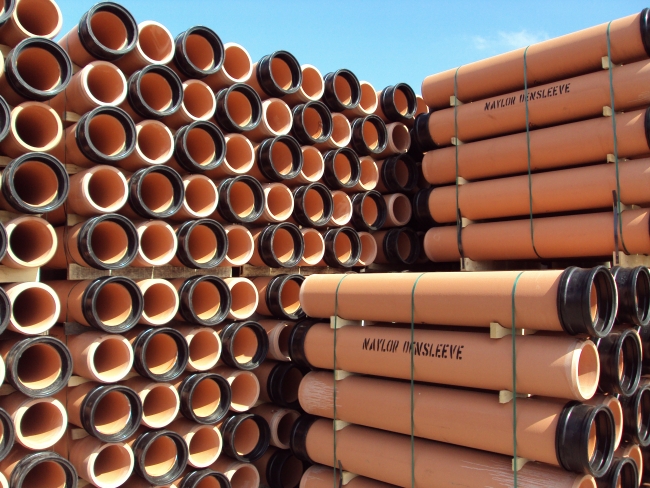 Naylor Industries can produce up to 50 miles of pipe per day / Picture: Naylor

Naylor – which holds the prestigious Gold Investor in People Standard – invests heavily in its people, hiring a dozen apprentices a year to train the next generation of engineers, technicians and craftspeople. It runs two-week summer camps for local school children to learn about career opportunities in British manufacturing, including engineering, technical and craft roles.

The Duke of Kent, who is the Queen’s cousin, toured the factory with Edward Naylor and met with staff members and apprentices.

Mr Naylor said: “Queen Victoria was on the throne when my great-grandfather founded Naylor Industries. It was an honour to show the Duke of Kent around our facilities.”

Mr Naylor said British manufacturing has a bright future: the company trades internationally and has exported pipes onto every continent and into 65 overseas markets, he added: “If you use the best available technology and you are efficient in your raw material sourcing and processes, the fact that your unit cost of labour is more expensive than overseas competitors is mitigated by the fact that they have to pay a lot of money to ship their products across the world.”

Naylor made the investment decision before Britain voted to leave the European Union; the decision was partly driven by the increasingly unpredictable climate. Mr Naylor said: “Every year we seem to be seeing once-in-a-lifetime weather events. “As it rains more heavily, we need larger capacity pipelines to deal with storm water. Large diameter pipes are an important part of measures to defend the country against flooding.”

As regards the future, the company remains broadly upbeat, “We progressed this development despite the outcome of the Brexit referendum. Although this has introduced some uncertainty into our key markets, we hope in due course to get our share of the big infrastructure projects which are in the pipeline such as the high-speed rail, smart motorway and nuclear power projects”