A giant metal stamping press, that will power the first occupier of the International Advanced Manufacturing Park (IAMP), has been shipped through the Port of Sunderland.

French car parts business, SNOP, which is locating on nationally significant manufacturing hub IAMP, will take delivery of a 3,000 tonne Transfer Press and the £15m investment in this facility will form a key part of its equipment when SNOP begins a phased move to its new site in just a few months’ time.

Although the press, capable of stamping new generation ultra-high strength steels to support vehicle lightweighting, has been delivered, it will take around three months to assemble and commission the press, which stands in a 9m deep pit that has been engineered by the factory’s construction company Howard Russell. 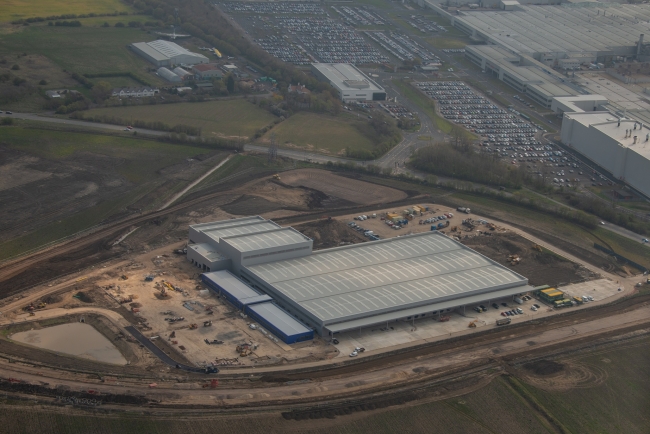 SNOP UK Plant Director, David Brander, said the arrival of the press would mark a significant moment in the development of the facility, with the final fit-out due to happen following the handover of keys in June.

He said: “The move to IAMP is strategically important for SNOP UK. For some time, our current facility has limited our capacity, and in moving to a new base, we can maximise our potential with space for expansion.

“The press is a key component of the facility, so today’s delivery of it really does represent the ‘start of the end’ of work on our new factory and we look forward to putting it to use over the coming months and years as we settle into our fantastic new space.”

The company, which designs and manufactures a range of automotive parts, supplying the likes of Peugeot, Audi, Renault, Mercedes, Volkswagen and Seat, as well as Nissan, will take more than 17 acres of the first phase of IAMP, and has invested some £15m into the new building and a further €15m into the equipment needed to power it. It is expected the move will increase the firm’s capacity, taking turnover from 54m Euros to 90m with further space to expand and creating an additional 100-150 jobs, on top of the firm’s existing 250-strong team.

What is the IAMP?

IAMP One covers 150 acres and will deliver 1.6m sq ft of advanced manufacturing and industrial space. The second phase will provide an additional 2.6m sq ft, creating a scheme of significant size and scale.  UK Government has pledged £42m from the Local Growth Deal through the North East Local Enterprise Partnership (LEP) towards infrastructure including new roads, bridges and environmental enhancements to support the development. The Local Growth Deal is supporting major capital investments to promote innovation, economic and skills infrastructure and sustainable transport as part of the North East Growth Deal.  SNOP was the first business to confirm its intention to move to IAMP, in 2018, and expects to have completed a staged move to the new base by August 2020.

Sunderland City Council Chief Executive, Patrick Melia, added: “SNOP is a fantastic business and it’s excellent news for the region that it is affirming its commitment to the area by investing so heavily in new machinery to be housed in its new facility.

“What is even more encouraging for us as a city is the fact that – even before the first factory opens its doors at IAMP – Port of Sunderland is reaping the benefits as the gateway to the area for this giant press. And the power of Northern Spire to transform the connectivity between the port and IAMP and make it physically possible for parts of this size and scale to come in through Sunderland, is fantastic.  This is a great example of how investment in IAMP and investment in Port of Sunderland will pay dividends for the city economy.”

IAMP is a partnership between Sunderland City Council, South Tyneside Council and Henry Boot Developments, and is expected to create more than 7,000 jobs.