The Leeds-based Roberts Mart, the UK’s leading independent manufacturer and supplier of flexible packaging, has announced a record turnover in the wake of a stellar 2018.

Turnover for the firm, that employs 200 staff, rose by £4 million to £38 million, the highest in the family-run company’s 167-year history.

In the wake of such a successful year, the award-winning company is investing in two state-of-the-art machines, a high-speed slitter and a laminator. The new £400,000 slitter has multiple automating solutions which will increase firepower and flexibility in the production process, while the Super Combi 4000 laminator and coater cost £500,000. 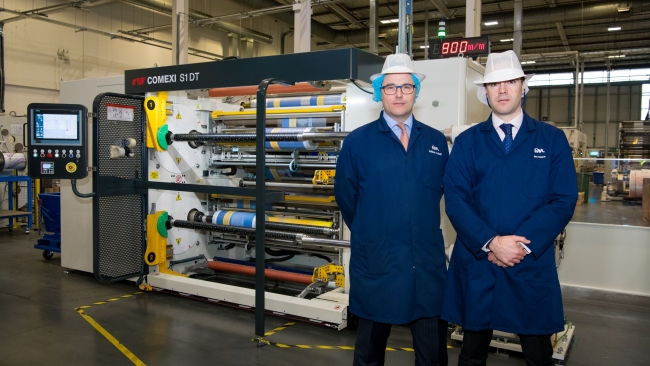 After record turnover growth in 2018, Roberts Mart is embarking on a £900,000 investment programme / Picture: Roberts Mart

Roberts Mart’s managing director, William Roberts, said: “It has been a very busy year for the company. This significant investment in new equipment is possible because we have a healthy order book – with a good number of new customers coming through the pipeline as well. We are seeing growth across the board, particularly food, where we are seeing much more opportunity in snacks and confectionery.

“Normally you would spread capital expenditure out over a period of time but the amount of new business we are winning dictates that this time it has been made all at once. It has been an excellent last 12 months – and in the light of our new investment in the slitter and the laminator, which will make our production process swifter, sharper and more efficient, the future looks very bright indeed.

“We are indebted to our hard-working staff, whose loyalty and teamwork is exemplary. They are the bedrock of our success,” he added.

Roberts Mart has a tremendous track record for winning awards across the globe and this year is no exception. The company has triumphed in the Flexographic Technical Association (FTA) Excellence In Flexography Awards with its Fruit Bowl Apple School Bar Wrapper and Espresso Monte Carlo Deca Gourmand Bag designs. The awards will be presented in New Orleans in May.

Roberts Mart, which was founded by William Roberts in Leeds in 1852 and is run by the sixth generation of the Robert family, supplies a vast range of shrink wrap, laminated film and high-quality printed flexible packaging to clients in the food and drink, home textiles (including duvets) and paper products industries.