A pioneering biotechnology firm will start the next phase of clinical trials of its antiviral drug early next year after winning US$55 million (£42.5m) from US and European investors.

ReViral, which has a research facility at the North East Technology Park (NETPark) in Sedgefield, County Durham, won its latest round of funding following a successful human trial of its highly potent drug, RV521, at the Queen Mary Bioinnovation Centre in London. 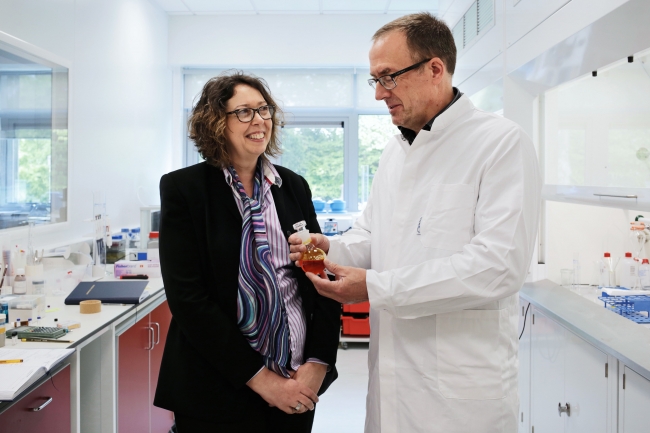 The drug combats Respiratory Syncytial Virus (RSV) – a virus which is highly dangerous in those with compromised immune systems, such as young children and the elderly. It has caused an estimated 200,000 deaths worldwide annually in children under five alone and there are currently no RSV therapies available.

Former Durham University lecturer, Dr Stuart Cockerill, and his former colleagues at Arrow Therapeutics combined their expertise in the areas of virology and antiviral therapies and set up ReViral in 2011.

Dr Cockerill said: “The next phase of the trial will be worldwide and will take approximately six to nine months. It will put a different perspective on developing the drug. The good thing about anti-viral drugs is that quite early on you know the compound works, it’s putting it through the larger patient groups that takes the time.”

Stevenage-based ReViral opened its research facility at NETPark’s Incubator in 2016 and has found it’s been the ideal location to grow the business and carry out its cutting edge research, among scores of other high tech companies which are making major advancements in healthcare.

Dr Cockerill added: “There’s seven of us at NETPark and we love it. It’s a great location and a good site being among other companies such as CPI. It’s clean and a safe site.”

The new funding will enable the company to progress RV521 into paediatric clinical trials and to continue the development of a novel series of antiviral inhibitors targeting RSV replication. The study will be followed by additional trials in adult stem cell transplant patients.

The financing was jointly led by New Leaf Venture Partners and Novo Ventures, part of Novo Holdings A/S, with additional new investment from Perceptive Advisors. Existing investors Andera Partners, OrbiMed and Brace Pharma Capital also participated in the fundraise. In conjunction with the financing, representatives of New Leaf Ventures and Novo Ventures will be joining the ReViral Board of Directors.

The company expects to start paediatric trials early next year with the drug available in six to seven years’ time.

NETPark, is run by Business Durham, the economic development organisation for County Durham, and has recently undergone an ambitious £7.4m expansion and created new space for companies looking to scale up, with the addition of two brand new buildings NETPark Explorer 1 &2 on site.

Catherine Johns, director of innovation at Business Durham, concluded: “ReViral is among many innovative companies in the supportive environment of NETPark which are making world-leading discoveries and creating cutting edge products and services. We’re delighted they’ve won this latest round of funding to continue the fantastic research work they do in County Durham.”