Heelman, a specialist CNC machine shop that focuses on small and medium batch manufacturing for customers across the automotive, aerospace and pneumatic fittings sectors, has expanded into a fourth adjoining unit at Ludlow Business Park.

The family-owned manufacturing business which has operated in Ludlow since it was founded in 1982, has expanded its base so that it can better meet customer demand, drive operational efficiencies, improve the working environment and create new jobs thanks to two grants supported by the Marches Local Enterprise Partnership (LEP). 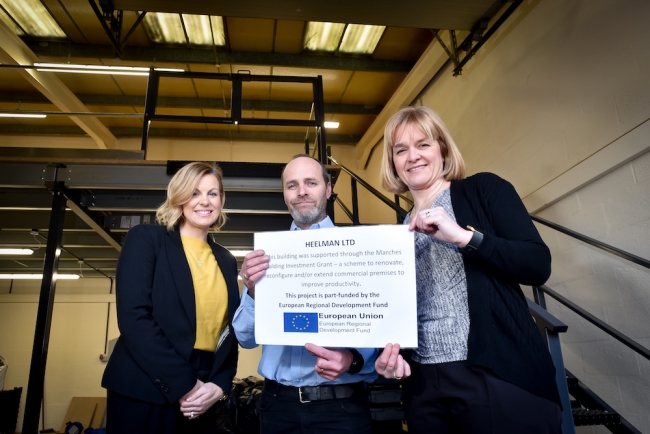 Part of the £2.5m Marches Building Investment Grant (MBIG) which is part-funded by the European Regional Development Fund, the scheme is intended to support businesses across Herefordshire, Shropshire and Telford & Wrekin that need to finance extensions, renovations or reconfigurations of commercial premises. For Heelman, it has meant that physical expansion can be achieved without a move to new premises.

Andy Styles, General Manager, said: “Increasing demand from both existing and new customers meant that we needed to review and improve how we managed our production so that we could manage this increased workload.

“Whilst a move to another, larger, unit on the business park was a consideration, this would have entailed moving all the machinery, as well as carrying out reparations to the existing units that we’d vacate and simply that was not financially viable.  When we found out, therefore, about the MBIG programme, it quickly became apparent that it could provide a way for us to realise our growth potential.”

Heelman’s growth is also expected to lead to a potential 10% increase in turnover. Programme Manager Caroline Cattle, added: “It’s great to witness a grant applicant come to us via referral from one of our partners in the region as it allows them to benefit from all-round support and achieve a level of growth that may not have otherwise been possible.

“In the case of Heelman, they’re now working on recruiting an additional CNC Programmer as well as focusing on significantly increased turnover.  However, they’re doing so confident that they’re also presenting themselves in a more professional and far safer way and this is, in many ways, one of the forgotten aspects of the grant’s benefits.”

The MBIG funding received by Heelman has not only provided distinct areas for non-production activities but has also driven efficiencies via physical adaptions that include an internal opening between the units and the installation of a mezzanine floor.  The electrics and lighting have also been upgraded to facilitate continuous working across the 4 units.

Catherine Bray, Manufacturing Growth Manager for The Marches and Worcester, concluded: “A company the size of Heelman is a perfect example of how a smaller company can realise its growth potential by tapping in to various funding streams.  We were delighted to support their vision for growth by providing funding for specialist IT consultancy and now, with the MBIG funds which has allowed their physical growth, I’m sure they’ll enjoy a very successful future.”