Despite the concerns expressed by some multi-national manufacturers regarding post-Brexit supply chains, the UK market for contract manufacturing remains healthy and stable.

The latest Contract Manufacturing Index (CMI) reveals that the market is still 30% up on a year ago. Although there has been a slight dip from the previous quarter of 5%, the overall market looks to be holding steady.

Within the headline figure, there has been a shift in the makeup of the market, with fabrication now standing at 56% of the total and machining on 35%. Just three months ago, machining represented 38% and fabrication 51% – and whereas fabrication rose consistently through the quarter, machining rose from April to May but then levelled off in June.

The UK contract manufacturing market is just 5% down in Q2 against a record high in Q1 – machining has dipped while fabrication soars / Picture: Getty/iStock

Compared to the equivalent quarter in 2017, fabrication is up 69%, machining down 4%. Other areas, including contract electronics manufacturing, toolmaking and moulding, were down 23% but represented less than 10% of the total.

Commenting on the figures, Qimtek owner Karl Wigart said: “Overall the outlook appears to be positive and the market is still significantly above where it was last year. The growing strength of fabrication within the subcontracting market can actually be traced right back to the first quarter of 2016.

“It may be the case that OEMs are more comfortable with adding in-house machining capacity than venturing into new processes such as laser cutting, press-braking and skilled welding where there can be better economies of scale when using a specialist.

“We do have some anecdotal evidence that a number of organisations which used to outsource machining have now brought it in-house as they have invested in machine tools that can handle all of their needs.” 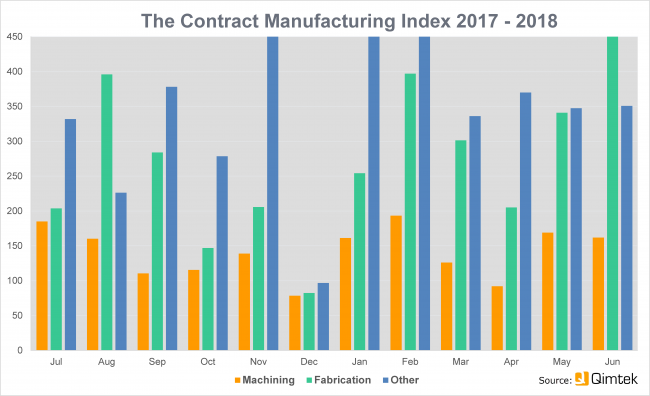