Amphenol Invotec, which manufactures printed circuit boards in Tamworth and Telford, has received a national award from aerospace competitiveness experts Sharing in Growth.

The award was presented to Amphenol Invotec’s staff by Sharing in Growth (SiG) chairman Dr Bryan Jackson who toured the Tamworth plant, meeting some of the teams who have contributed to the company’s success.

The Integrity trophy, which is named after one of SiG’s three team values, gives annual recognition to a programme participant which ‘Does what’s right, does it well, when they say they will.’  Specifically, Amphenol Invotec was selected because it has engaged its workforce through strong leadership and governance to deliver continuous improvement. As a result, the company is on target to achieve its business ambition of £34 million in turnover by 2020, up from £23 million in 2017. 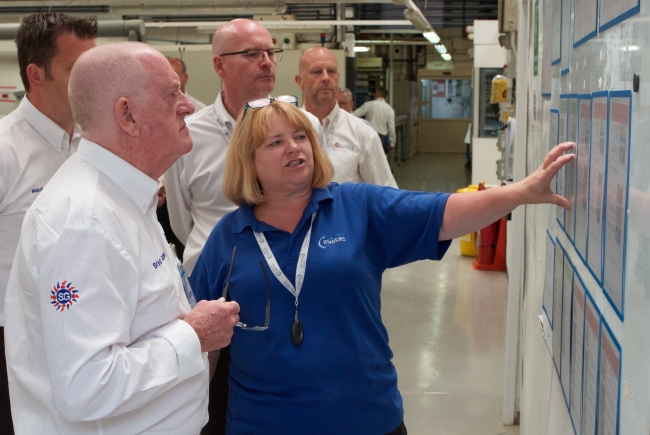 Amphenol Invotec general manager Tim Tatton paid tribute to the company’s 250 staff who have embraced the training and coaching provided by the SiG programme. He said: “Our new trophy recognises all the efforts put in by teams across the company. We have achieved a massive business transformation since joining Sharing in Growth three years ago. We’ve just celebrated a record first quarter in 2018 and, with investment in new equipment and Sharing in Growth’s continued support, we are accelerating our continuous improvement projects. We are optimistic about the order pipeline and are focussing on robust processes, total productive maintenance and asset care so that we meet customers’ quality and delivery expectations.”

Dr Jackson said: “There is a fantastic buzz at Amphenol Invotec. I am tremendously impressed by the commitment and enthusiasm for doing the right things and doing them well. By increasing your skills and knowledge you are building a strong platform for future success and ensuring a vital capability for UK industry.” 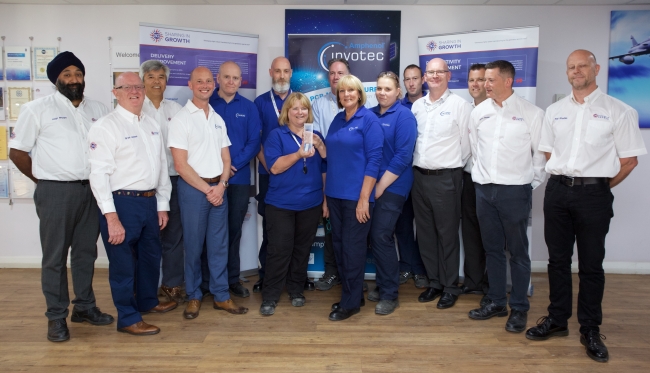 The SiG programme was created five years ago to upskill 60 UK aerospace suppliers to achieve around 20% competitiveness improvement and so secure contracts and jobs. Endorsed by Airbus, BAE Systems, Boeing, Bombardier, GE, GKN, Leonardo, Lockheed Martin, MBDA, Rolls-Royce, Safran and Thales, SiG is supported by the Regional Growth Fund and more than £150 million in private investment.

Companies on the SiG programme have secured more than £2.4 billion in contracts and around 4,300 jobs. This is equivalent to over 22,000-man years of high-value work. In line with the government’s Industrial Strategy, SiG is on track to secure over £60 of contract value for every £1 of government investment.

The programme individually tailors and delivers an intense and integrated programme of training, coaching and mentoring for ambitious companies in the aerospace supply chain. Typically, the four-year programme focuses on leadership, culture and operational capability delivered by SiG’s own 120 strong team of business coaches as well as a bank of world-leading experts including The University of Cambridge’s Institute for Manufacturing, Deloitte, Industry Forum and the National Physical Laboratory.