The UKESF (UK Electronics Skills Foundation) has launched its #TurnOnToElectronics initiative, fronted by Gadget Show presenter Georgie Barrat. In the face of an increasingly large skills shortage, the campaign will create a buzz around the UK Electronics industry with the end goal of encouraging more young people into pursuing careers in this exciting sector.

Despite the UK having the world’s sixth largest Electronics sector (contributing towards 6% of our GDP which is over £120 million per year), only 3,330 UK students enrolled in Electronic and Electrical Engineering degrees in 2017 according to UCAS. This is less than half the number enrolling in far more popular Mechanical Engineering degree courses. In addition, the Electronics skills crisis is likely to worsen post-Brexit, adversely affecting our economic prosperity. 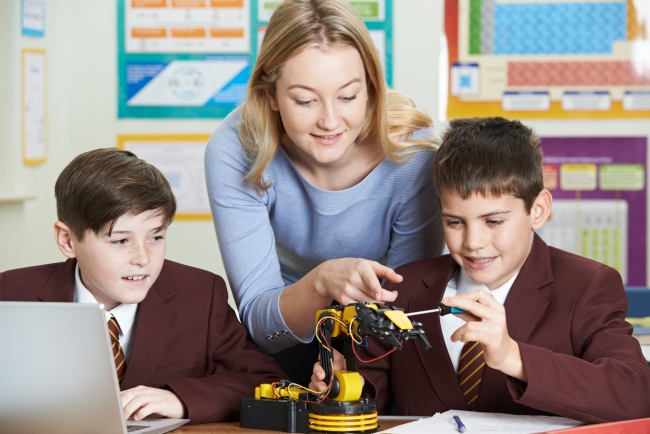 The UKESF has launched its #TurnOnToElectronics initiative, with the end goal of encouraging more young people into pursuing careers in the electronics sector / Picture: Getty/iStock

Launching at The TechWorks Summit, the UKESF’s #TurnOnToElectronics campaign is fighting back against this crisis. The campaign will be publicly endorsed by eminent figures at the event, including Professor Bashir Al-Hashimi CBE, Arm Professor of Computer Engineering and Dean of the Faculty of Physical Sciences and Engineering at the University of Southampton.

At the Summit, the Foundation’s CEO, Stewart Edmondson, and Dr Geoff Merrett, Head of the Centre for Internet of Things and Pervasive Systems, will be calling on employers, universities and other stakeholders to join the campaign and work collaboratively with schools to attract more young people into Electronics. They are asking partners and allies to formally pledge their support by signing the campaign manifesto.

Georgie Barrat, the Gadget Show presenter, fronting the campaign said: “I’m delighted to be involved in the UKESF’s #TurnOnToElectronics campaign, which is shining a welcome spotlight on careers in electronic engineering. Often incorrectly seen as one of the less glamorous STEM areas, studying electronics can lead to an exciting and creative career, which enables students to make a real difference in the world. The UKESF is doing a fantastic job of encouraging more young people to study electronics and embark on a career in one of the world’s most important and dynamic industries.”

Stewart Edmondson, CEO of the UKESF, added: “The UK has a long heritage of technological innovation and a world-class electronics industry. Adding to that, our Government’s new industrial strategy emphasises the importance of AI, robotics and transportation in further boosting productivity and earning power throughout the UK. The aim of our campaign is to ensure that this hugely important industry isn’t consumed by a black hole caused by a lack of talent. We urge supporters to sign our manifesto and pledge to help the campaign in any way they can!”

Professor Bashir Al-Hashimi CBE, Dean of the Faculty of Physical Sciences and Engineering, University of Southampton, concluded: “Electronics matters to me both personally and professionally as part of my key ambition to ignite interest and excitement amongst students and their teachers at schools across the UK. The #TurnOnToElectronics campaign provides a dynamic, inclusive and original approach to increase awareness amongst 11-16 year-olds. I am proud to support it and to promote the potential of the UK electronics sector to a new generation.”