Vauxhall’s manufacturing plant in Luton has built its 250,000th second generation Vivaro, since its production started in 2014. 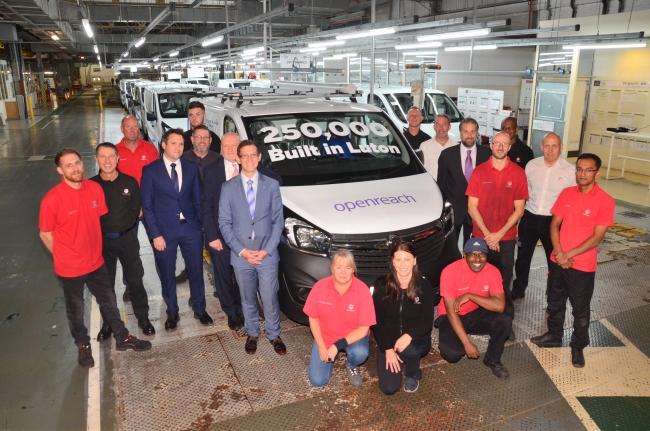 250,000 second generation Vivaro vans have been made at Vauxhall’s plant in Luton, Bedfordshire / Picture: Vauxhall

Vauxhall is the UK’s number one commercial vehicle manufacturer, a position it has held for 17 years, since Vivaro production first started. The total Vivaro build, including the first generation model, is 1.2 million, since production began in 2001. Of these, 274,020 Vivaros have been sold in the UK, including over 14,000 so far this year.

Stephen Norman, Vauxhall’s Managing Director said: “As a British brand since 1903, we are very proud to celebrate this milestone at our Luton manufacturing plant and handover the landmark vehicle to BT Fleet Solutions, our biggest Vivaro customer. Our hardworking and dedicated workforce produce vehicles of exceptional quality so it is no surprise these British-built Vivaro vans are so successful in the marketplace.”

Henry Brace, Managing Director of BT Fleet Solutions added: “I’m delighted to take delivery of the 250,000th Vivaro on behalf of BT. We have purchased 25,000 Vivaros from Vauxhall over the past 14 years and they have served us well.

“As with all the 30,000 plus commercial vehicles on our fleet, we work very closely with manufacturers like Vauxhall to source the right product that is able to meet the needs of our people today and for the next five to seven years.

“Key to us when deciding which product to buy is working very closely with the people who will be driving the vans, manufacturers and converters to get the right product aligned to our business needs and strategy.”

Earlier this year, Groupe PSA, which produces vehicles under the Peugeot, Citroën, DS, Opel and Vauxhall brands, announced its plan to produce a brand new, next generation Vivaro at Luton next year. Groupe PSA’s plan includes investment in the plant to increase its production capacity to 100,000 vehicles per year. 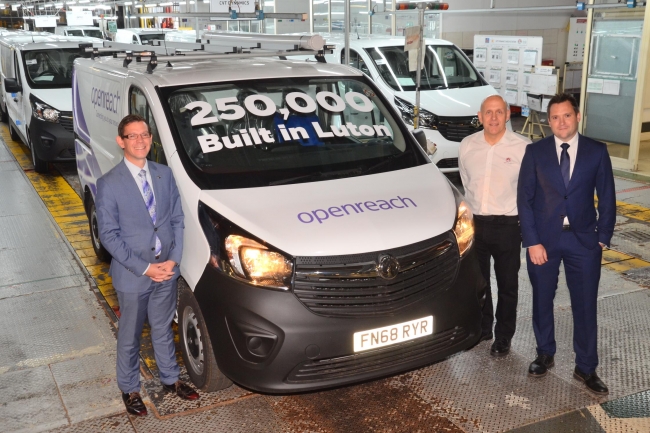