A £100,000 investment drive is reaping dividends for one of the UK’s leading specialists in custom clothing manufacture and personalised workwear.

MyWorkwear, which employs 15 people at its facility in Telford, has seen turnover grow 25% over the last twelve months after securing a number of new accounts with a host of manufacturers, the high-profile retailer Harvey Nichols and Oxford University.

The company is now looking to build on recent successes by increasing its capacity by nearly two thirds with the acquisition of an eight head embroidery machine that also gives it the capability to produce logos on clothing that feature up to 15 colours. 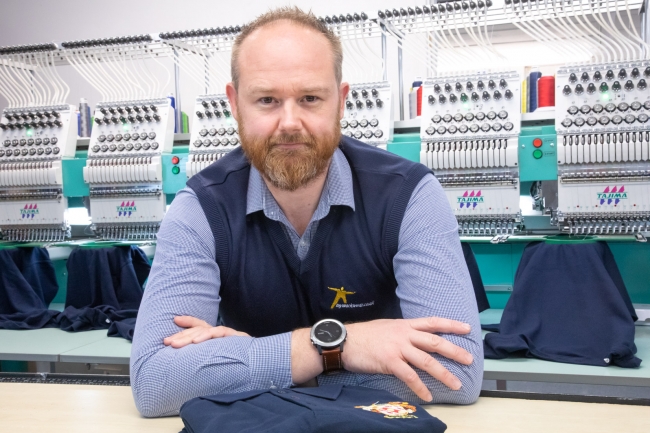 Backed by a £10,000 grant from the European Regional Development Fund’s Business Growth Programme (managed by Birmingham City Council), the investment has the potential to create up to three new jobs and will help the firm move towards its target of £2m annual sales by 2021.

James Worthington, Managing Director of MyWorkwear, said: “We’ve had a really good three years and have created somewhat of a niche within the UK manufacturing community, who like our no-nonsense approach and our ability to deliver high quality workwear on-time and to budget.

“There’s lots of new enquiries coming in all the time, most of which are long-term partnerships and require additional capacity. This is when the decision was made to invest in a new 8-head Tajima TFMX-IIC1508, which will add to our existing two single-head and two six-head machines.”

He added: “We are already delivering up to 5000 personalised garments every week and this additional investment opens the door to us moving this figure closer to 8000. Now it’s our job to go out there and win the work to reach this target.”

MyWorkwear, the trading name for J.M. Worthington & Co Ltd, was founded in 1976 by James’ father Mike Worthington, with the initial focus on producing golf and cycle bags.

The company’s first breakthrough came when it won contracts to produce bespoke clothing for Halfords and a chain of car garages, followed by a second ‘coup’ with relocating Japanese manufacturers tapping into the firm’s expertise.

James Worthington joined the business in 2001 and, at that time, the management team noticed a change in the way that people were shopping and became one of the first workwear companies to join the online revolution and enable purchasing via the web.

This kick-started continuous growth and was further reinforced in 2015 when Ben Simpson and his business partner Peter Barfield became Directors of the company, bringing with them a wealth of IT expertise.