Rockford Components has won a new national award which recognises how its staff and management have worked together to grow the business.

A trophy and certificate were presented to Rockford managing director Peter Lion by Andy Page, CEO of Sharing in Growth, in front of the plant’s 100-strong Worksop workforce who were also praised for their skills and commitment. Sharing in Growth (SiG) is an intensive government-backed programme designed by industry to raise the competitiveness of the UK aerospace supply chain.

Rockford, which has plants in Worksop, Nottinghamshire, Rendlesham, Suffolk and Salisbury, Wiltshire, was selected for the Sharing in Growth transformation programme in 2014. Since then, with the support of Sharing in Growth, Rockford has developed its business significantly, changed its culture, created a farsighted strategy and delivered operational performance in line with world-class practices. 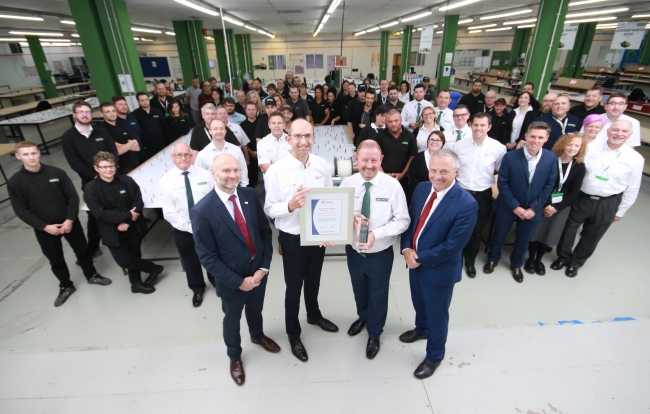 Trophy handover with guests and staff at Rockford / Picture: SiG

As a result, it has secured £30 million in contracts, created 100 new jobs and increased exports to more than 50% of production. It is currently recruiting a range of roles to cope with its increased sales, including shop floor operatives, engineers and technicians and has just launched a new System Solutions Capability where Rockford is working with its suppliers to provide full systems rather than just cable assemblies or wire harnesses.  The company’s new business winning strategy also includes additional investment in a concept called Future Factory in its Worksop facility, which could help move annual sales up from £16 million to £40 million and could potentially lead to another 60 new jobs.

Presenting the award, Andy Page recognised Rockford staff for their dedication to continuous improvement. He said: “As a country we have surprisingly low productivity compared with competitors in the USA, Germany and France. Sharing in Growth was created to help companies compete globally in high value manufacturing, making jobs more fulfilling, rewarding and secure. Ambitious companies deserve support so Sharing in Growth is proud to have played a part in Rockford’s fabulous success.”

Accepting the award Rockford Managing Director Peter Lion said: “We have grown from being a small family firm in 1978 to becoming the UK’s largest independent provider of wiring, interconnect and system solutions for the defence, aerospace, marine and nuclear industries. The traditional UK family-run business can only go so far and we had started to hit the glass ceiling. We recognised that we needed to change and improve. Fortunately Sharing in Growth gave us the path to deliver and we now have the structure and capability to deliver and sustain growth.”

Steve Strachan of Lockheed Martin UK praised Rockford for being flexible, responsive and always willing to go the extra mile. He said: “Rockford’s journey with Lockheed Martin Ampthill over the last three years has seen an evolution from a supplier-customer relationship into a fully collaborative approach and that is testament to both Rockford and Sharing in Growth. I congratulate you all and look forward to strengthening our relationship further over the next three years and beyond.” 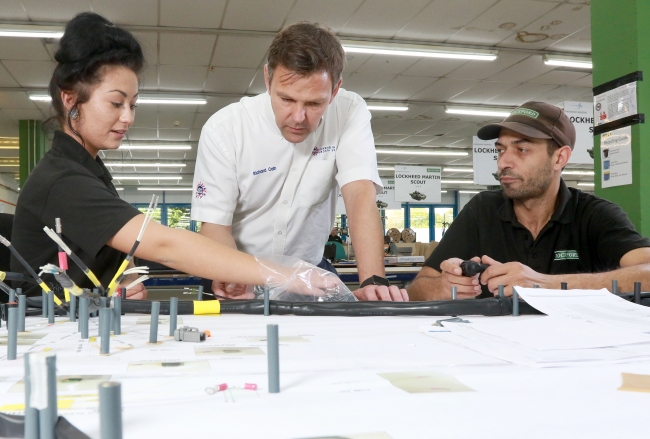 MP John Mann congratulated the whole Rockford team and described how overseas competition had become intimidating. He said: “In the past this country has been happy to muddle along. But, if this area wants to be a decent area, with decent jobs and decent pay then there is no choice but to invest in skills and technology. Doing what Rockford is doing now, secures the company and helps secure the country. It helps everyone earn by helping the company make profits.”

Heather Lawson, Interim Regional Manager with the EEF added: “Innovation and skills are vital in closing the productivity gap and making businesses more competitive. Companies, like Rockford, who invest in their company and their staff are helping to secure the future of UK manufacturing.”

Steve Hayter, Rockford’s Commercial and Finance Director, explained that the company is also determined to help other smaller supply chain companies by representing SMEs on the trade body ADS’s AMC Committee and the SC21 Steering Board. He said: “We achieved SC21 bronze and then SC21 silver and it was a springboard to take us into Sharing in Growth. Taking part in the Sharing in Growth programme has changed us from being a good British company to being a great international company with over 50% of production exported last year.”

The SiG programme is endorsed by Airbus, BAE Systems, Boeing, Bombardier, GE, GKN, Leonardo, Lockheed Martin, MBDA, Rolls-Royce, Safran and Thales. It is supported by the Regional Growth Fund and more than £150 million in private investment.

With SiG support, the first 43 companies on the programme have secured around £2 billion in contracts to date – almost 20% of which is for direct export. Consequently, having secured more than 3,000 jobs, SiG is well on target to hit its ultimate objective of safeguarding 10,000 UK jobs by 2022.