“Super teacher” puts 25% of his students into engineering degrees

A physics teacher from Sutton has won a £5,000 prize for his school by promoting engineering and sending a quarter of his students into engineering degrees and courses.

Jamie Costello, head of science at Sutton Grammar School, has won a prize organised by the ERA Foundation (ERAF) for his “exemplar performance” in promoting engineering to school students, including running voluntary projects like designing and making an ocean drifter device and founding Sutton’s branch of the Big Bang Fair, an education outreach event.

He was awarded top honours in the ERAF’s David Clark Prize on Wednesday at the foundation’s 15th annual lunch on 9th May, winning in a very tough field that was reduced to a shortlist of three for the first time, making Mr Costello the winner of winners. 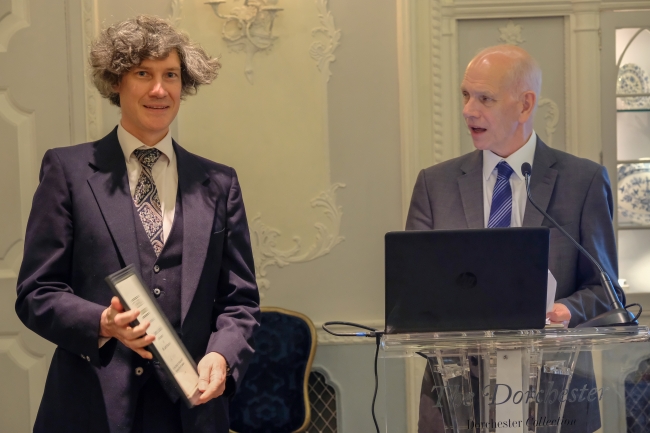 Remarkably, in September 2017, 25 per cent of Costello’s students at the “outstanding” Ofsted ranked school went on to study engineering-related courses.

“I am absolutely thrilled to win this award from the ERA Foundation,” Costello said. “I have designed and built high altitude balloons, an ocean drifter, a solar storm detector, and I also run the regional Big Bang Fair for EngineeringUK in Sutton. The next one is on 13 July – which all are invited to, of course.”

Costello was nominated for the prize by the Smallpeice (sic) Trust for his work for The Arkwright Foundation, which included submitting a 500-word piece on his outreach activities. Runners up to the 2018 Clark Prize were Tracey O’Connor of Bishop Challoner Catholic College, Birmingham and Neil Hammersley from The Kingsway School, Cheadle.

The ERA foundation has promoted engineering and “productive industry” in the UK, with an emphasis on excellence in electro technologies, for 15 years since the former Electronic Research Association was sold to engineering group Cobham in 2003. It also supports projects to stimulate young people into engineering careers.

“One of the Foundation’s awards, the £5,000 David Clark Prize recognises a teacher who has done something exceptional to encourage interest in engineering in schools,” said chairman Sir John O’Reilly, who is director-general of knowledge and innovation at the Department of Business, Innovation and Skills. “This year’s winner, Jamie Costello from Sutton Grammar School, has certainly made a huge difference with such a high proportion of school leavers going on to study engineering degrees.”

Laser scanning technology could be used to measure parts with thousands of data points with no contact, he said, removing the need for separate measurement stages, and fibre lasers fitted to robots allowed new welding techniques. On 3D printing he said, “there has been a lot of talk about additive manufacturing, it is a useful tool but is no panacea. It can’t be used to effectively replace many processes, but the theory of building up a part instead of wastefully removing large sections makes perfect sense.” 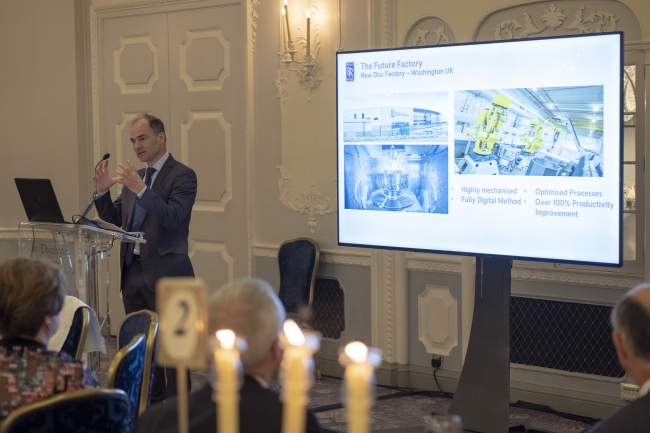 Keynote speaker at the event, Warren East, the CEO of Rolls-Royce discussed the new technologies being embraced by manufacturers & their new disc factory in Washington UK which uses a fully digital manufacturing method / Picture: ERA

Mr East said that digital factories with a lot of autonomous systems were an important in the future of manufacturing, but the concept of “lights out” factories had been around since the 1980s. The smart technologies were not the only solution and people would still be needed to design and build the systems, and provide services around the products.

He added that despite manufacturing being just 10 per cent of UK GDP it was very important for Britain to retain big, high value manufacturing companies for the long term, because their barriers to entry made them more reliable employers and value creators than many digital and software companies that changed ownership and location easily.

More information about previous winners of the David Clark Prize for science teachers can be found here: https://www.erafoundation.org/