The government has announced over £54m worth of funding for three innovative green projects creating the next generation of electric trucks and hydrogen-powered buses.

The three projects, located in Cwmbran, Warwickshire and Ballymena, are forecast to secure nearly 10,000 jobs across the UK and save 45 million tonnes of carbon emissions, equal to the total amount of emissions produced by 1.8 million cars over their lifetimes.

For Wrightbus in Northern Ireland, £11.2m of funding will go towards the development and manufacture of low-cost hydrogen fuel cell technology for buses, designed and built in Ballymena. Wrightbus has also confirmed it intends to create 3,000 jobs over the next decade, alongside developing a centre of excellence for zero-emission technology. Last year, Wrightbus launched the world’s first fleet of hydrogen double decker buses in Aberdeen, with more planned for major cities including Birmingham and London during 2021.

In Cwmbran, Wales, £31.9m will be used to develop lightweight electric propulsion systems for heavy goods vehicles. Led by Meritor, this technology could be applied in a range of ways, such as giving lorries greater travel range and better energy efficiency for coaches and construction vehicles. The funding will also see a new technology centre built in Scotland. 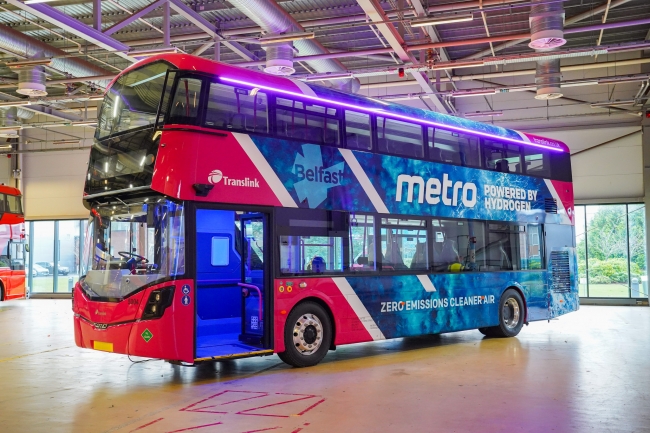 £54m of funding has been awarded to green transport projects – one project will support Wrightbus create 3,000 new jobs over the next 10 years / Picture: Wrightbus

In Warwickshire, £11.3m has been committed through Shield Manufacturing Technologies to develop and manufacture integrated motor and energy recovery systems for cars and vans based on motorsport technology.

Kwasi Kwarteng, business secretary, said: “The UK is leading the world by developing cutting edge technology that will help to tackle climate change and lead to a green, competitive future for our automotive supply chain. These projects will not only help accelerate the wider application of greener technology in lorries and buses, but will also help generate the high-skilled jobs to level up communities across the UK while ensuring we build back greener from the pandemic.”

This funding announcement builds on the recent launch of the government’s national Bus Back Better strategy and its 10 Point Plan for a green industrial revolution, both of which aim to accelerate the shift to zero emission vehicles and decarbonise the UK’s transport networks.

Jo Bamford, executive chairman at Wrightbus, said: “The funding will allow us to realise our ambitions of creating a centre of excellence for zero emission technology in Ballymena, enabling us to produce the next generation of world-leading hydrogen buses at a higher volume and a lower cost than ever before. It will safeguard more than 1,000 skilled jobs and will allow us to create more than 3,000 additional jobs over the next 10 years, giving a significant boost to the wider economy in Northern Ireland.”

Welsh secretary, Simon Hart, added:”As we work towards net zero by 2050, South Wales will be a hub of innovation and green technology as we transform the UK economy over the coming years. The investment in electric propulsion systems in Cwmbran will create more than 1,000 skilled jobs. It follows recent UK government backing for the Global Centre of Rail Excellence and to develop a net zero industrial zone across South Wales as we ensure that the region’s proud heritage is continued with the industries of the future.”

The funding is being coordinated by the Advanced Propulsion Centre which supports the development of low carbon emission technologies for cars, buses, heavy goods vehicles, and vans. These projects will help further the UK’s ongoing efforts to develop a sustainable supply chain for manufacturing electric vehicles by 2026.