Mura Technology has started construction on the world’s first commercial-scale plant to use its revolutionary hydrothermal process, able to recycle all forms of plastic waste and provide the raw ingredients for a sustainable circular plastics economy.

The new plant, based in Teesside, is set to be operational in 2022, with the ability to process 80,000 tonnes of plastic waste per year. It is expected that 100 permanent jobs will be created once complete. It will form the blueprint for a rapid global rollout that will see one million tonnes of capacity in development worldwide by 2025 – equivalent to nearly half the plastic packaging waste produced in the UK each year. Sites are planned in Germany, the US and Asia.

Mura’s proprietary HydroPRS™ (Hydrothermal Plastic Recycling Solution) process uses supercritical steam to convert plastics back into the oils and chemicals they were made from, ready to be used for new virgin-grade plastic products. It can recycle all forms of plastic – including those considered unrecyclable such as multi-layer, flexible plastics used in packaging – with no limit to the number of times the same material can be recycled. This means it has the potential to eliminate single use plastic.

Construction has begun on a new multi-million pound plastic recycling facility that can recycle all forms of plastic waste / Picture: Mura Technology

Worldwide, 350m tonnes of plastic is produced annually, with half becoming waste in less than a year. The UK alone produces 2.4m tonnes of plastic packaging – the second highest per capita in the world. Yet globally, only 9% of plastic has ever been recycled – the vast majority (79%) currently ends up in landfill or the environment and 8m tonnes enters the oceans every year, predicted to increase tenfold by 2025, if solutions aren’t found. This lost resource of plastic waste is a huge economic opportunity – valued at up to $120bn per year, according to the World Economic Forum.

Dr Steve Mahon, CEO of Mura Technology, said: “We are at the tipping point of an environmental catastrophe – it’s time to seize the initiative and put an end to plastic pollution across the world. HydroPRS™ represents a win-win for the environment, economy and society, helping keep our environment free from plastic and oil where it belongs – in the ground.

“We need to act now and that’s why we’re taking a global-first approach – to scale fast and meet the challenge head on. We’re working with global partners to deploy our unique HydroPRS™ process where it’s needed, today, to create a sustainable future and eliminate plastic pollution.”

Global plastic production also creates an estimated 390m tonnes of CO2 every year – equivalent to over 172m cars. It accounts for 6% of global oil consumption today and is set to increase to 20% by 2050. Advanced recycling processes reduce the need for fossil fuel extraction for virgin plastics. In addition, they can save approximately 1.5 tonnes of CO2 per tonne of plastic recycled compared to incineration. On completion, the Teesside plant has the potential to eliminate up to 120,000 tonnes of CO2 per year, compared to incineration of the same plastic waste. 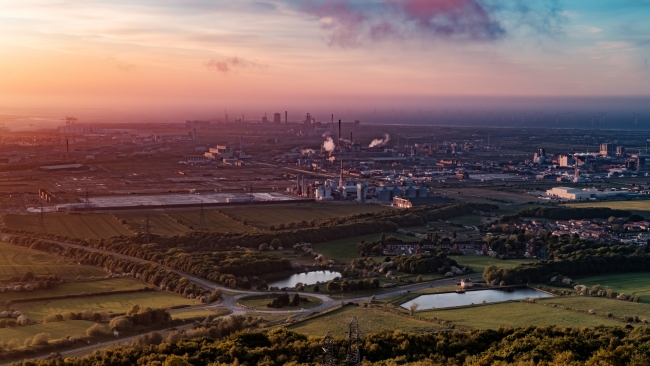 In October 2020, the Teesside project was awarded £4.42m by the UK government via the Industrial Strategy Challenge Fund’s Smart Sustainable Plastic Packaging programme. Earlier this month, advanced recycling was for the first time recognised as contributing to government targets for recycled plastics and supporting measures such as the proposed plastic tax for recycled content in packaging.

Paul Davidson, challenge director at Innovate UK, said: “Plastic waste is one of the biggest threats to our environment, which is why UK government is supporting innovative technologies that can drive towards a more sustainable and circular economy for plastic recycling.”

Mura’s HydroPRS™ process, utilising at its core the Cat-HTR™ technology, developed and owned by Licella Holdings Limited, breaks down plastics using water in the form of supercritical steam (water at elevated pressure and temperature). The steam acts like molecular scissors, cutting longer-chain hydrocarbon bonds in plastics to produce the valuable chemicals and oils from which the plastic was originally made – in as little as 25 minutes.

These oils – equivalent to the original fossil products – are then used to produce new, virgin-grade plastic with no limit to the number of times the same material can be processed. Importantly, the products may be suitable for use in food-contact packaging, unlike conventional recycling processes.

Most recycling today uses mechanical methods that can degrade the quality of the plastics – a process often referred to as ‘down-cycling’. They are also unable to recycle various common forms of waste plastic. Mura’s process can recycle all waste plastics, including those considered ‘unrecyclable’, such as films, pots, tubs and trays, that can currently only be incinerated or sent to landfill. The process is designed to work alongside conventional recycling and wider initiatives to reduce and reuse plastic.

Using supercritical steam means the technology is also inherently scalable. Unlike other methods, which heat waste from the outside, the steam imparts energy from the inside, providing far more efficient conversion of plastic waste; a process which can be maintained regardless of scale.

In the face of rising consumer pressure, the world’s largest brands are urgently looking to tackle their plastic problem. Unilever has committed to halve the amount of virgin plastic in its packaging by 2025 and increase recycled content by a quarter. Nestlé has committed to 100% recyclable or reusable packaging by 2025 and reducing virgin plastic by a third. However, meeting these targets needs technologies capable of recycling all plastics to create infinitely recyclable products.

Mura is in advanced discussions with global brands and investors to fund and deploy HydroPRS™ and use the raw ingredients it creates to eliminate the need for new virgin plastic, meeting consumer demand for action.

Dr Steve Mahon concluded: “The problem isn’t plastic, it’s where it ends up. We want to change the way the world thinks about plastics – not as something to throw away, but as a valuable resource that can be reused over and over without harming our natural world.”