The state-of-the-art craft will replace the existing police patrol launches currently in use by the MDP and GDP. Key roles will include protecting HM Naval Bases in the UK and Gibraltar and undertaking high-profile armed patrolling of the UK’s borders. The five-year contract will deliver 16 patrol craft to the MDP and two craft to the GDP.

Based in Liverpool, the contract will sustain 50 jobs at MST and create a further 15 across the north west of England. The contract is part of an increased defence spending commitment announced by the Prime Minister last November of over £24bn across the next four years, focusing on the UK’s ability to adapt to meet future threats. 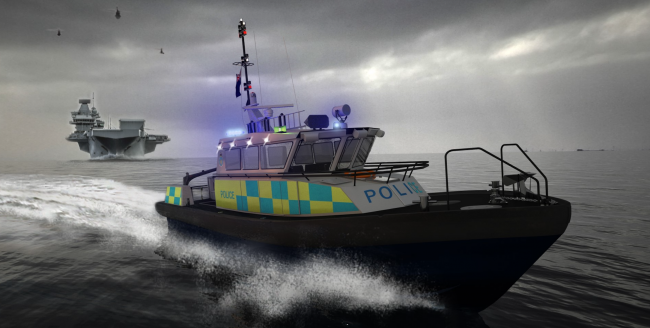 The 15 metre craft will be able to carry 3 crew members and up to 4 passengers, travelling up to 30 knots. They will be powered by twin inboard diesel propulsion engines driving twin waterjets with a focus on low running costs, reduced environmental emissions and suitability for significant operating hours. The bridge will feature a fully integrated C4ISR and craft management system, utilising the latest open-architecture structure and state-of-the art shock mitigation crew seating. These improvements in craft capability will be a major advancement for the MDP and GDP.

As highly manoeuvrable craft, they will also be used for 24/7 policing to protect defence assets and deter and detect any potential threats. Able to operate in all weather conditions, direct support to the Royal Navy will also include escort, cordons and maritime security capabilities.

This is a high-profile project for the MST Group and will be a further step forward in the expansion of its continuously growing craft range and its position as a leading manufacturer in the maritime industry.

Benjamin Kerfoot, managing director at Marine Specialised Technology Group, said: “We are delighted to be working with DE&S again on another prestigious project supplying our UK Defence Forces.

“This contract is another example of the success the MST Group has managed to achieve over the last two decades and is also a key indicator of the further accomplishments we will achieve in our near future.”

Defence minister Baroness Goldie, added: “This £36 million investment allows our MOD Police and Gibraltar Defence Police forces to enhance the vital security service they provide to our military bases at home and overseas. Designed and constructed by maritime experts in the UK, this contract reaffirms our commitment to invest in homegrown industry knowledge and support the protection and creation of skilled jobs.”

Construction has already started on the design project and the first police patrol craft is expected to be delivered in July 2022.