A planning application for a gigafactory at Coventry Airport has been submitted by joint venture partners, Coventry City Council and Coventry Airport. The proposals, which were first announced in February this year, are set to be determined by the city council and Warwick District Council later in 2021.

The submitted plans provide an updated analysis of the economic benefits of a gigafactory to the West Midlands. The proposals would deliver 5.7 million sq ft of space for both battery production and recycling, would add £434m in GVA to the regional economy each year, as well as create 6,000 new jobs and tens of thousands more in the supply chain.

According to the plans, the gigafactory will be powered by 100% green energy, using a combination of sources including solar and wind power, as well as grid supplied renewables, and will be able to recycle used batteries as well as build new ones.

The partnership was formed earlier this year to bring forward proposals for the gigafactory, to ensure the site is ready for investment and can become operational quickly – making it significantly more attractive to potential investors. 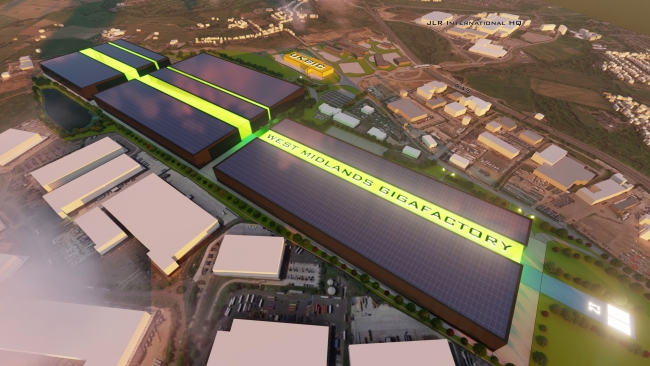 Plans have been submitted to establish an electric battery gigafactory in Coventry for both battery production and recycling / Picture: Coventry City Council

The West Midlands offers one of the most competitive sites for a gigafactory in the UK. A third of all cars produced in the UK come from the region which has unique access to existing supply chains. The region is home to Jaguar Land Rover, Aston Martin Lagonda, and BMW, whilst Coventry Airport is adjacent to the UK’s largest battery research centre, the UK Battery Industrialisation Centre (UKBIC).

In the last month, the UK government has faced increasing pressure from the industry to back more gigafactories. In June, both the CBI and SMMT published reports calling for the UK government to increase its support for UK battery manufacturing facilities to keep up with European competitors.

The UK government has made up to £500m of funding available for electric vehicle battery production, including UK-based gigafactories, which the West Midlands will be bidding for in due course.

Cllr George Duggins, Leader of Coventry City Council, said: “The submission of a planning application for a gigafactory is the important next step as we seek to deliver battery production for the West Midlands. We have worked with regional partners and industry experts at pace to deliver outline proposals for a world-leading facility, powered by green energy, and ready for investment.”

Andy Street, the Mayor of the West Midlands, added: “It is mission critical that the West Midlands secures a gigafactory, both for the future of our region’s automotive industry and the huge economic and job benefits it would bring, as well as the future of our planet. I am therefore delighted that after years of collaborative work, we have now been able to reach this milestone moment of formally submitting a planning application for our preferred site.

“By driving forward with our plans and going through the planning process now, we are trying to get everything in place for when a commercial negotiation between supplier and customer concludes, meaning we can move quickly to get the site operational as soon as possible.

“The West Midlands is already home to the country’s biggest car manufacturer, Europe’s largest research centre of its kind, the UK’s only battery industrialisation centre, and a world-leading supply chain. A gigafactory therefore is the natural next step for the UK’s automotive heartland, and I will not rest until we have secured one.”