Tens of thousands of jobs, billions of pounds in investment and new export opportunities are set to be unlocked through government plans to create a thriving low carbon hydrogen sector in the UK over the next decade and beyond.

Business and energy secretary, Kwasi Kwarteng, has set out the UK’s first-ever Hydrogen Strategy to drive forward the commitments laid out in the Prime Minister’s 10 Point Plan for a green industrial revolution by setting the foundation for how the UK government will work with industry to meet its ambition for 5GW of low carbon hydrogen production capacity by 2030 – which could replace natural gas in powering around 3 million UK homes each year, as well as powering transport and businesses, particularly heavy industry.

A booming, UK-wide hydrogen economy could be worth £900m and create over 9,000 high-quality jobs by 2030, potentially rising to 100,000 jobs and worth up to £13bn by 2050. By 2030, hydrogen could play an important role in decarbonising energy-intensive industries like chemicals, oil refineries, power and heavy transport like shipping, HGVs, and trains, by helping these sectors move away from fossil fuels.

The government has launched its hydrogen strategy – set to support over 9,000 UK jobs and unlock £4bn of investment by 2030 / Picture: Getty/iStock

With government analysis suggesting that 20-35% of the UK’s energy consumption by 2050 could be hydrogen-based, this new energy source could be critical to meet targets of net zero emissions by 2050 and cutting emissions by 78% by 2035 – a view shared by the UK’s independent Climate Change Committee. In the UK, a low-carbon hydrogen economy could deliver emissions savings equivalent to the carbon captured by 700 million trees by 2032 and is a key pillar of capitalising on cleaner energy sources as the UK moves away from fossil fuels.

Business and energy secretary, Kwasi Kwarteng, said: “Today marks the start of the UK’s hydrogen revolution. This home-grown clean energy source has the potential to transform the way we power our lives and will be essential to tackling climate change and reaching net zero.

“With the potential to provide a third of the UK’s energy in the future, our strategy positions the UK as first in the global race to ramp up hydrogen technology and seize the thousands of jobs and private investment that come with it.”

The government’s approach is based on the UK’s previous success with offshore wind, where early government action coupled with strong private sector backing has earned the UK a world leading status. One of the main tools used by government to support the establishment of offshore wind in the UK was the Contracts for Difference (CfD) scheme, which incentivises investment in renewable energy by providing developers with direct protection from volatile wholesale prices and protects consumers from paying increased support costs when electricity prices are high.

As such, the government has launched a public consultation on a preferred hydrogen business model which, built on a similar premise to the offshore wind CfDs, is designed to overcome the cost gap between low carbon hydrogen and fossil fuels, helping the costs of low-carbon alternatives to fall quickly, as hydrogen comes to play an increasing role in our lives. Alongside this, the government is consulting on the design of the £240m Net Zero Hydrogen Fund, which aims to support the commercial deployment of new low carbon hydrogen production plants across the UK. 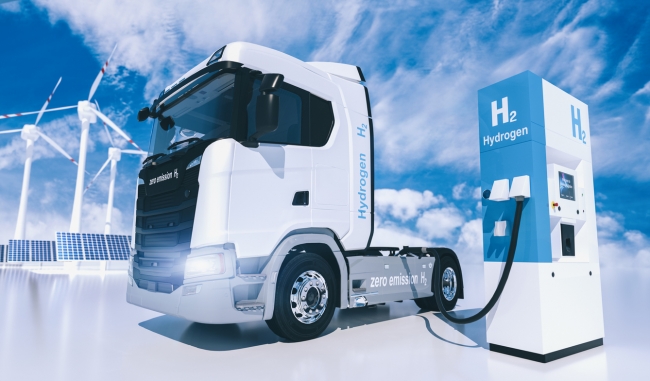 Jo Bamford, founder and executive chairman of Ryze Hydrogen, said he welcomed the Hydrogen Strategy: “As the Business Secretary states in his foreword, ‘The time for real world action is now’. We stand ready to start developing green hydrogen production sites across the UK, but the Government must now confirm its plans for the Renewable Transport Fuel Obligation, and the Bus Service Operators Grant so that industry has the certainty to invest.

“The Government must also accelerate progress on its commitment to purchase 4,000 zero emission buses. UK-made Wrightbus hydrogen buses are already on the streets of Aberdeen, London, Birmingham, Belfast and Dublin and improving air quality. These are ideal first users of hydrogen, and can be easily scaled up to stimulate further investment in green hydrogen production.”

Prioritising and supporting polluting industries to significantly slash their emissions, the government has also announced a £105m funding package through its Net Zero Innovation Portfolio that will act as a first step to build up Britain’s low carbon hydrogen economy. The investment will help industries to develop low carbon alternatives for industrial fuels, including hydrogen, which will be key to meeting climate commitments. This includes:

£55m Industrial Fuel Switching Competition – funding will support the development and trials of solutions to switch industry from high to low carbon fuels, such as natural gas to clean hydrogen.

£40m Red Diesel Replacement Competition – providing grant funding for the development and demonstration of low carbon alternatives to diesel for the construction, quarrying and mining sectors, with the aim of decarbonising these industries reliant on red diesel, a fuel used mainly for off-road purposes such as in bulldozers. With red diesel responsible for the production of nearly 14 million tonnes of carbon each year, the investment supports the UK government’s budget announcement removing the entitlement to use red diesel and rebated biodiesel.